In 1882, in front of a small gathering of scientists, Sir Robert Kock pronounced the discovery of tubercle bacilli. He got Nobel Prize in 1905. Even today, after more than a century of his discovery, the TB remains elusive. We started with clinical diagnosis, and sooner we realized that the symptoms and signs of TB are nonspecific. With the discovery of X-ray by Wilhelm Röntgen, chest X-ray became a useful tool, but no radiological findings are specific for tuberculosis. Sputum microscopy is cheap and to some extent specific test but it is less sensitive. Culture in solid media is the gold standard, but it takes a longer time. Culture in liquid media can reduce the time, but then they take about 2 weeks. High-resolution tomography (HRCT) and other radiological tools can detect the anatomical changes in the lung and other organs but are not diagnostic of TB.

Like any infective conditions, the diagnosis of TB depends on isolation of organisms or their nuclear products. An ideal test for diagnosis of TB should be rapid, low cost, standardized, point of care test (POCT), automated (requiring minimal training), requiring minimum bio-safety measures, and with satisfactory sensitivity and specificity and realistic positive and negative prediction values. POCT is defined as medical diagnostic testing performed outside the clinical laboratory close to patient care centers. Molecular diagnostic tests fulfill many of those criteria.

The MTBDRplus(LPA) and Xpert MTB/RIF (CBNAAT) have been endorsed by the World Health Organization (WHO) for the rapid diagnosis of tuberculosis and drug-resistant tuberculosis. Revised National Tuberculosis Control Programme (RNTCP) of India has incorporated CBNAAT for use in district and subdistrict levels and LPA for use in national and regional levels. This chapter will mainly concentrate on CBNAAT and LPA.

Kary Mullis in 1993 developed PCR. In PCR, the biological sample is heated to denature double-stranded deoxyribonucleic acid (DNA) into single-stranded DNA (Fig. 1). After cooling, a specific primer is added to produce a template-primer complex. Then nucleotides and heat stable DNA (Taq) polymerase are added to produce first filial generation. First filial generation serves as a template for further DNA synthesis, and the process is repeated to produce millions of copies (exponential amplification after 35 multiplications) around 34 billion copies are produced. Then amplified products are detected by southern blotting or fluorescent/radiolabelled probe hybridization.

The sensitivity and specificity of PCR in TB are 95 and 98%, respectively in smear positive for acid-fast bacilli (AFB) respiratory specimens, and they are 75 to 88 % and 95 % respectively in smear negative culture positive for MTB respiratory specimens.1 PCR is more sensitive than a smear but less sensitive than culture for diagnosis of TB. PCR may be positive in dead and dormant bacilli, so it does not always indicate active TB. Also, contamination and laboratory errors can cause false positive results.

On the contrary, a negative PCR result is not sufficient to exclude TB. It has been observed that PCR positivity may vary from sample to sample. PCR is less accurate if the patient had ATD before. The presence of inhibitors like haemin, globulin, beetle nut, etc. can cause false negative results. PCR has the problem of high cost, and it is not a POCT.

The GeneXpert has been developed by the Foundation for Innovative New Diagnostics (FIND). The Xpert MTB/RIF assay has been approved by WHO in 2010 and US FDA in 2013 for the diagnosis of tuberculosis in patients getting less than 7 days of therapy. It is a fully automated and quick test (results obtained by 2 hours) that requires minimum bio-safety and training. CBNAAT can also detect rifampicin (RIF) resistance. Dr Mario Ravihlione, director of WHO stop TB department has rightly said, “This new test represents a major milestone for global TB diagnosis and care. It also represents new hope for the millions of people who are at the highest risk of TB and drug-resistant disease.”

The GeneXpert MTB/RIF is an automated real-time PCR assay designed for the rapid and simultaneous detection of MTB and ‘RIF’ resistance within 2 hours. The test utilizes single-use plastic cartridges with multiple chambers that are preloaded with liquid buffers and lyophilized reagent beads. Clinical samples are treated with sodium hydroxide and isopropanol-containing reagent at 3:1 ratio for sputum pellets and at 2:1 ratio for unprocessed sputum samples. Then, they are incubated at room temperature for 15 minutes. The treated sample is then manually transferred to the cartridge, and then that is loaded into the gene Xpert instrument. Subsequent processing is fully automated. Mycobacterium tuberculosis is detected by the five overlapping molecular probes (probes A–E) that collectively are complementary to the entire 81 bp rpo core region. MTB is identified when at least two of the five probes give positive signals with a cycle threshold (CT) of d”38 cycles. CT is the number of multiplication of DNA that is required for the detection of DNA of MTB. The basis for detection of RIF resistance is the difference between the first (early CT) and the last (late CT) M. tuberculosis-specific beacon (ÄCT). 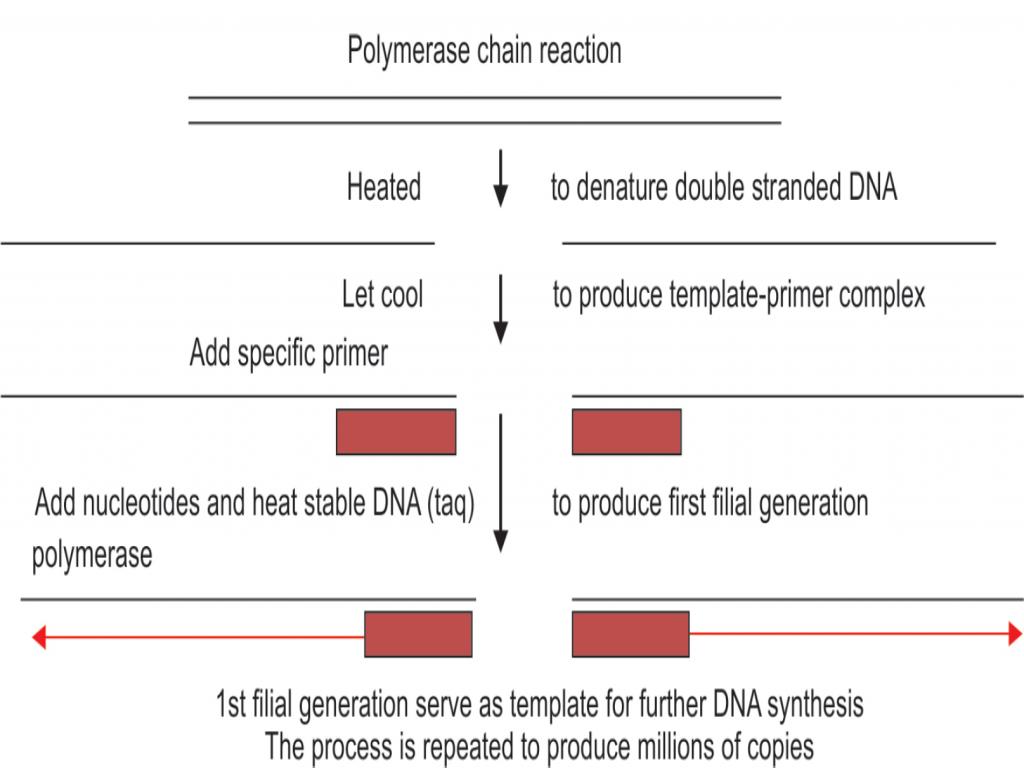 One study done in pediatric patients showed that in pulmonary samples, CBNAAT detected MTB in 21.4% sputum/induced sputum samples and in 33% gastric lavage/aspirate samples. For extrapulmonary samples, the detection rates were 12.7% for CSF samples, 10% for pleural fluid samples and 66.7% for lymph node aspirate samples. They found that in pediatric population sensitivity, specificity, positive predictive value and negative predictive value of CBNAAT in reference to culture were 92.7%, 98.9%, 97.1%, and 97.2% respectively, and those were 100%, 90.68%, 71.42%, and 100% respectively in reference to Ziehl-Neelsen (ZN) smear.5

Line probe assay was introduced by WHO for low resource countries in 2008, that can rapidly screen patients within 2 days. It can detect MTB complex as well as drug-resistant mutants. Demonstration project conducted at Ahmedabad, Hyderabad and Jaipur showed that performance characteristics of LPA were: sensitivity 96% (CI: 90 to 98%), specificity 99% (CI: 95 to 99%), positive predictive value 99% (CI: 95 to 99%), and negative predictive value 95% (CI: 89 to 98%).7 LPA proved highly accurate in the rapid detection of RIF and isoniazid (INH) resistance. The sensitivity and specificity of LPA were found to be 96% and 99% respectively for RIF resistance, and 72% and 97% respectively for INH resistance. It has 97% concordance with LJ medium drug susceptibility testing (DST) for RIF resistance and 79% for INH resistance.

In LPA, DNA is extracted from MTB complex culture isolates or clinical smear positive samples. Then, species-specific regions and resistant-determining regions of DNA are amplified using biotinylated primers. Then, labelled PCR products are hybridized with specific oligonucleotide probes and immobilized on a strip. Then, captured labeled hybrids (Biotin Avidin Alkaline phosphatase system) are detected by colorimetry and that lead to the development of color-bands those can be observed by naked eye. 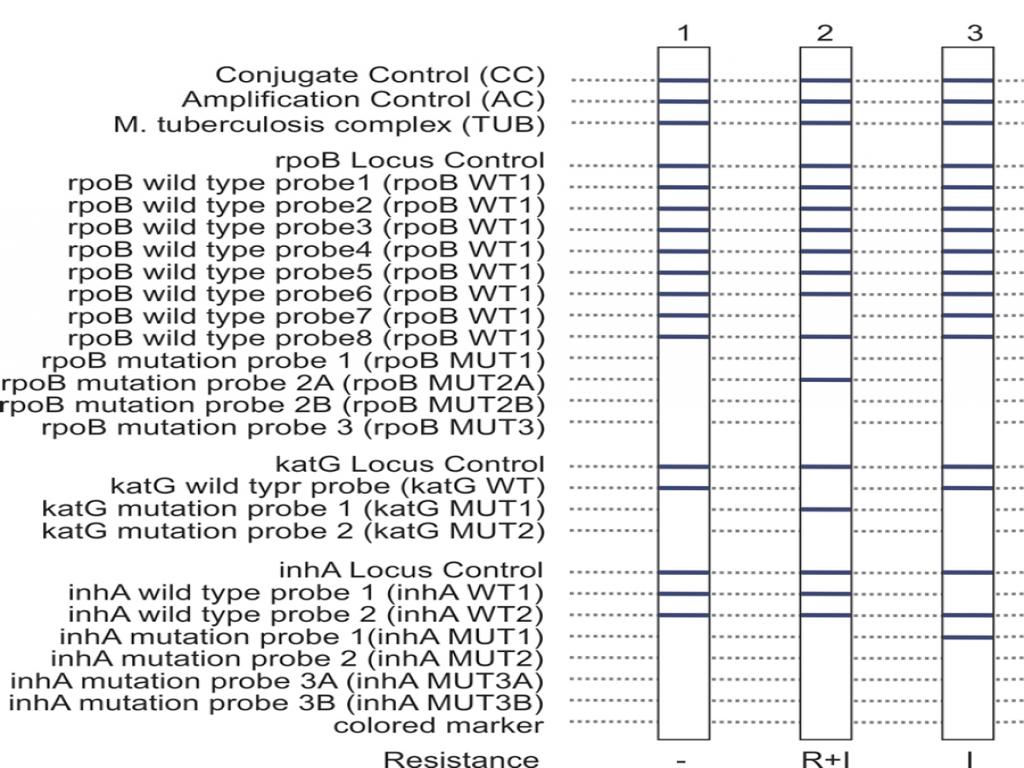 Differences between CBNAAT and LPA

One recent study questioned the reliability of RIF resistance report of Xpert MTB/RIF in samples with very low detection of MTB.9 The study was designed to check the performance of Gene Xpert in those clinical samples where MTB detected by GeneXpert were very low. Out of 2024 specimens tested positive with gene Xpert, 410 specimens were MTB detection level “very low.” The number of RIF resistance was 35 among ‘MTB detected very low’ specimens, and those samples were put in culture. Only 22 produced positive cultures, and those were subjected to confirmatory testing for RIF resistance like DST, rpo sequencing and spoligotyping. Surprisingly, 12 out of 22 GeneXpert “RIF resistant” isolates showed RIF sensitivity on DST. By rpoβ sequencing those isolates it was proved that those samples did not harbor rpo mutations and those were actually RIF sensitive. Remaining 10 out of 22 samples were truly RIF resistant. In samples with very low bacillary load, the false RIF resistance detection by Xpert MTB/RIF was 54.5%. The observed false-resistant results were confirmed with three different gene Xpert cartridges. Though not recommended, it is suggested that the detection of RIF resistance by Xpert MTB/RIF in very low detection samples should be subjected to LPA or culture-based DST. This may be true in smear-negative samples, pediatric samples, samples in HIV positive persons and extrapulmonary TB.

The second line LPA (LPAsl) is a DNA-based test that identifies genetic mutations for resistant to fluoroquinolones (FQs) and second line injectable drugs (SLIDs). WHO recommended LPAsl as an initial test for detection of additional resistance to FQ and SLID in patients with confirmed RIF-resistant TB or MDR-TB. These recommendations apply to the use of LPAsl for the direct testing of sputum specimens and indirect testing on culture isolates in adults as well as in children. For SLID, the results highly correlate with culture-based phenotypic resistance. For FQ, the results correlate better with ofloxacin/levofloxacin resistance than moxifloxacin resistance.

MTBDRsl version 2.0 is now available. The main advantage of version 2.0 is that the test can be done from smear negative and crude biological samples. The only disadvantage is that ethambutol sensitivity cannot be detected in version 2.0. The difference between version 1.0 and 2.0 has been depicted in Table 2.

Difference between version 1.0 and version 2.0 of MTBDRsl

A new device called the GeneXpert Omni is currently under development as a point of care test. It will use the same cartridges as gene Xpert. The main advantages are that the instrument is smaller and lighter (portable), and less expensive. GeneXpert Omni has a built-in 4-hour battery so that it can work in areas without electricity.

The new Xpert MTB/RIF Ultra cartridge can be used on the same Gene Xpert equipment (Gene Xpert instrument, computer, monitor, keypad, barcode reader) and will be available at the same concessional price of USD 9.98 for all eligible countries. Changes inside the ultra cartridge include a larger chamber (double size) for DNA amplification and two additional TB detecting probes targeting IS6110 and IS1081 gene of MTB. Both are responsible for the increase in sensitivity of the ultra-assay.

Ultra assay is much more sensitive than Xpert. It can detect MTB where the concentration of bacilli is as low as 16 bacilli per ml compared to 131 per ml sputum for Gene Xpert). It is likely to be as sensitive as liquid TB culture. The ultra cartridge will be predictably better particularly in specimens with low numbers of bacilli, like smear-negative culture-positive specimens, persons with HIV co-infection, in pediatric specimens and extra-pulmonary specimens. Ultra detects RIF-resistance as efficiently as Xpert, but the specificity of ultra is likely to be higher due to improvements in assay design. The accuracy in the detection of RIF resistance was also better although not enough data were available to conclusively confirm this.

The increased sensitivity of the ultra assay is almost exclusively because of its low TB detection limit. The increased sensitivity may be offset by a decrease in specificity. Ultra may also be more prone to detect small numbers of non-replicating or nonviable bacilli, particularly in patients with a recent history of TB treatment, reducing the specificity of the assay. Reduced specificity may give rise to false positive results for TB detection. In the FIND-coordinated studies, such results occurred in fewer than 5% of persons with signs or symptoms suggestive of TB. Because of the internal molecular configuration of the Ultra cartridge, RIF resistance detection is not similarly affected.

It is claimed that Xpert MTB/RIF ultra will be a game changer for overcoming the challenge of fast diagnosis of TB in smear-negative patients, and we are moving a step closer towards TB elimination. But all tests, however effective they are, bring some problems with them. For example, increased sensitivity is associated with decreased specificity.

“We should not treat laboratory results but we should treat the patient.” That dictum is universally true. We have registered many successes in laboratories, but we failed miserably in the field conditions to apply that knowledge. As a result, we cannot achieve our goal in controlling tuberculosis.

How to cite this article: Sarkar S. Recent Development in the Molecular Diagnosis of Tuberculosis. Bengal Physician Journal 2018;5(2):10-16.