Scrub typhus is a vector-borne zoonotic infectious disease caused by Orientia tsutsugamushi, an intracellular rickettsia.1 The disease is carried by the larvae of mites (Trombiculidae family), and persons exposed to undergrowth or agricultural fields infested with the mites are at risk of developing the disease.1 The disease can be an occupational risk for farmers, forest workers, soldiers, or spelunkers.1 Mortality can be up to 50% in some cases.1 Different parts of India are increasingly reporting the incidence of this infection.2

Scrub typhus is an emerging infectious disease in India. The disease was first reported from South India in 2009.1 But now, most states of India have reported the disease.2 Clinical presentation of scrub typhus can be varied, and involvement of almost all systems and organs has been documented, either singly or in combination.2 The low index of suspicion among clinicians often leads to delay in diagnosis, and this increases mortality considerably.

In the current (2019) year, during the monsoon and post-monsoon seasons, a number of cases of scrub typhus have been reported from various parts of West Bengal. The symptomology was often protean, and clinicians were baffled by the myriad presentations of the infection. The disease was reported from both urban and rural areas. In a sizeable number of cases, encephalopathy was the presenting symptom along with fever. We here report a few of such cases (Table 1).

This was an 18-year-old female, presenting with high fever and headache for 5 days, and focal seizures starting 2 days after the onset of fever. She was brought to the ER in an unconscious state, and at presentation, the Glasgow coma scale (GCS) score was 8/15 with bilaterally extensor plantar. Computed tomography (CT) scan of the brain was normal, and the cerebrospinal fluid (CSF) study revealed 260 cells/mm3 (95% lymphocytes), protein 68 mg/dL, sugar 65 mg/dL. Liver and kidney function tests were normal. Total leukocyte count was 6,800/mm3, and the platelet count was 2.3 L/μL. Procalcitonin level was 0.056. The patient recovered after IV doxycycline.

A 40-year-old male from Hooghly, West Bengal came with high-grade fever for 4 days and altered behavior for 2 days. The patient had headache and vomiting, followed by drowsiness. At admission, opsoclonus-myoclonus was found. There was terminal neck rigidity. Total leukocyte count was 22,500/mm3 with 80% neutrophils, and platelet count was 2.1 L/mm3. Blood urea/creatinine was 61/2.4 mg/dL, increasing to 58/3.1 mg/dL of day 3, before resolving. CSF study revealed 1–2 cells/mm3, glucose 56 mg/dL and protein 121 mg/dL. The patient was empirically started on IV acyclovir and doxycycline. Later, blood for scrub typhus IgM came positive, while CSF for herpes simplex virus (HSV) PCR was negative. Serum glutamic oxaloacetate transaminase (SGOT) and serum glutamic pyruvate transaminase (SGPT) increased to 78 and 82 IU/L, respectively, before resolving. Procalcitonin was <0.02. The fever subsided, and consciousness became normal with doxycycline. But, the opsoclonus and slightly altered behavior persisted for 2 weeks. MRI brain was normal. 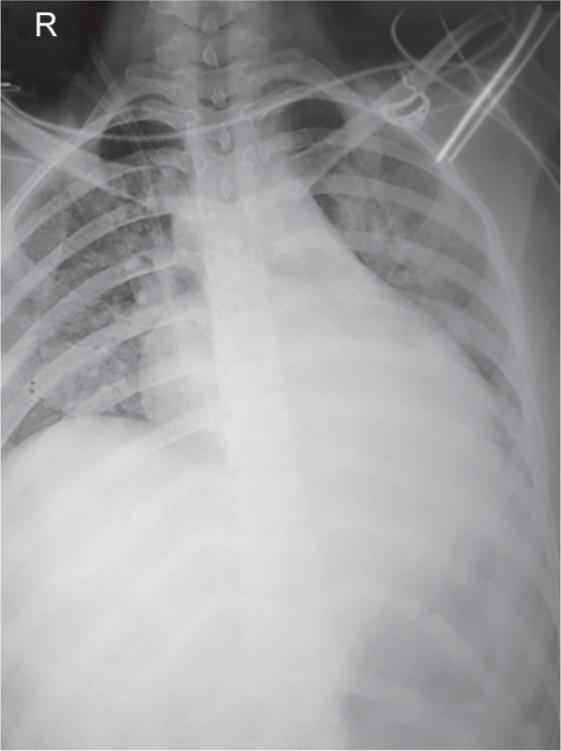 A 20-year-old female was admitted with high-grade fever for 7 days and unconsciousness for 2 days. There was terminal neck rigidity, and CT scan of the brain was normal. CSF study revealed a cell count of 20/mm3, all lymphocytes protein 141 mg/dL, and sugar 35 mg/dL. Urea/creatinine was 49/1.1 mg/dL at presentation, increasing to 51/1.5 on day 2, before settling. In the liver function test, bilirubin was normal, but SGOT/PT were 176/170 IU/L, respectively. International normalized ratio (INR) was 0.88. Total leukocyte count was 15,800/mm3 (N: 70%), and platelet count was 1 L/mm3. In this case, the patient had hypotension (B.P.: 90/60 mm Hg) for the first 3 days and also complained of some dyspnea (after regaining consciousness on day 2). Chest X-ray (Fig. 1) revealed early pulmonary edema. Echocardiography showed slightly reduced left ventricular systolic function (EF: 50%). However, the blood serology for scrub typhus was positive, and all symptoms resolved with doxycycline oral therapy.

All the serological tests for scrub typhus were done from the School of Tropical Medicine, Kolkata. In none of the four cases, any eschar was discovered. Other etiologies of encephalitis like Jap B, leptospira, dengue, and malaria were ruled out in all patients by suitable tests (to rule out double infection).

Every year, during the monsoon season and afterward, acute encephalitis syndrome (AES) emerges as an epidemic in different pockets of India.3 Usually, the major number of cases is reported from a few states like Uttar Pradesh, West Bengal, Assam, and Tripura.3 Acute encephalitis is a medical emergency, especially in children and physicians must decide on a proper treatment algorithm quickly. However, the etiology of AES is varied, and often there is much confusion as to the suitable protocol for management. Japanese encephalitis B is an important cause of AES, but the proportion of AES cases due to Jap B is slowly reducing in India due to immunization and better vector control. In such a situation, scrub typhus is emerging as an important cause of AES.

A study from UP, India stated that more than 60% of AES cases were positive for scrub typhus IgM.4 The case fatality rate was 1 in 6.4 In another study from Assam, out of the AES cases, 1 in 5 was scrub typhus.3 Similar reports have also been published from other ends of India.3 In the study from Assam, the absence of eschar often led to pushing scrub typhus lower down the list of differential diagnoses, and thus, delays in diagnosis.5 In our present series too, none of the four patients had any eschar. Thus, a high index of suspicion is necessary for endemic zones to facilitate early diagnosis of scrub typhus. In this same study, Khan et al. found the common presenting symptoms of scrub typhus to be fever, altered sensorium, headache, and nausea.5 Neck rigidity was present in less than 1% of cases. But in the present series, terminal neck rigidity was found in 75% of the cases (Table 1). Also, in Assam study, it was found that 49% of the patients died after discharge. The cause of this high mortality has not been analyzed. Therefore, it may be a good practice to complete at least a sizeable portion of the treatment before discharging scrub typhus cases. Selecting the proper drug is of paramount importance too. In UP, azithromycin has been recommended as a first-line treatment for scrub typhus since 2014.3 But that failed to reduce mortality of scrub typhus encephalitis, probably because azithromycin does not penetrate the CNS. These pharmacodynamics considerations must be taken into account.

In India, there are various etiologies of AES, including West Nile virus, Japanese encephalitis B, and dengue. These diseases occur in the same geographical locations during the same monsoon, post-monsoon periods and often have similar presentations. Moreover, one person can be infected with multiple pathogens. Hence, physicians dealing with such patients should be sure to complete a comprehensive array of diagnostic tests. Also, these diseases may occur throughout the year. Hence, out-of-season cases should also be considered ineligible patients.

The exact pathophysiology of encephalitis in this infection is unknown. Probable mechanisms include vasculitis of small vessels, especially in the grey matter of the brain.6 Pathologic findings include histiocytes, lymphocytes, and plasma cell infiltration of the leptomeninges, typhus nodules, and brain hemorrhage.6 Usually, the neurological symptoms and signs in scrub typhus encephalitis resolve completely, after therapy and only rarely, there are sequelae like prolonged coma or quadriparesis.7 All four of our cases recovered completely without any neurological sequelae. One of our cases had the rare manifestation of opsoclonus (case 3). This is an extremely rare manifestation, and in a study from CMC, Vellore, it was reported in 1% of cases.8 The opsoclonus usually resolves after treatment.8

Scrub typhus is a multisystem disease, and thus besides encephalitis, other systemic manifestations can also be found.9 In our cases, some of the patients had transaminitis and acute kidney injury. One patient had pulmonary edema. They all recovered with treatment. In a study on scrub typhus from Shillong, India, altered liver function test, acute kidney injury (AKI), and pulmonary edema were described in 100, 38, and 23% of the cases, respectively. Thus, encephalitis, along with other systemic features should prompt physicians to rule out scrub typhus.

We present these cases to sensitize clinicians to such cases of scrub typhus encephalitis. The public health programs on AES in India should also include this disease in the list of first-line investigations.