Introduction: Poststroke epilepsy (PSE) is a very important complication after cerebrovascular accident (CVA). Stroke is responsible for 10% of all seizures and about 55% of newly diagnosed epilepsy in elderly population. It may lead to longer hospitalization, worse immediate functional outcome, and high mortality.

Aims and objectives: We have studied 369 CVA patients from July 2017 to June 2019 to study the prevalence of epilepsy in stroke survivors, risk factors, and clinical manifestation of PSE.

Observation: Among 369 CVA patients, 34 presented with seizure: 22 patients with early seizure (within 2 weeks) and 12 with late seizure (after 2 weeks). Most of the patients were greater than 60 years of age (27 patients). The male:female ratio was 22:12. Among 34 patients, 26 patients were of cerebral hemorrhage and 8 patients were of cerebral infarct. History of hypertension was present in 29 patients. Majority of PSE patients were diabetic (24 out of total 34). Cortical involvement was present in 29 patients, and in 5 patients there was subcortical involvement. Among 34 patients, 26 experienced focal onset seizure; 5 patients had generalized seizure; and 3 experienced status epilepticus.

Conclusion: Physician should always treat stroke survivors with the risk of PSE in mind. While considerable difficulties exist in designing and conducting clinical studies of PSE, such as high heterogeneity of stroke survivors, further studies are necessary to explore primary and secondary prevention of PSE.

Poststroke epilepsy (PSE) is a significant and well-established clinical issue in patients who survive stroke. In a total of 34 longitudinal studies which was done over 1 lakh patients, 7% developed PSE.1 Poststroke epilepsy has been shown to account for 30 to 49% of all new onset seizure (Assis et al., 2015; Stefan et al., 2014). The occurrence of PSE often leads to fatal outcome in patients who survived after stroke2–4 (Bladin et al.; Labovitz et al.; Arboix et al.). Poststroke epilepsy often recurs in a large percentage of patients. In a study done over 360 days, Tanaka et al., 2015 found that PSE recurred in 30% patients. Depending on the result of a number of epidemiological studies, it can be said incidence rate of epilepsy is more in hemorrhagic stroke than ischemic stroke, with about 10–20% of patients developing PSE after hemorrhagic stroke compared with 2–14% after ischemic stroke.5–7 Seizure may occur at a close proximity after stroke (acute symptomatic, provoked, or early seizure) or after a few days interval following stroke (late seizure). According to the International League Against Epilepsy, early seizure is defined as seizure occurring within 7 days of cerebrovascular accident (CVA) and late seizure is defined as seizure occurring after 7 days of CVA.8,9 After an incidence of stroke, neuronal injury may occur from different causes, such as dysfunction in metabolism, decreased perfusion in brain, glutamate-induced excitotoxicity, malfunction of different ion channels, activation of astrocyte, inflammation in neurons leading to breakage of blood–brain barrier in the acute phase (Myint et al.; Reddy et al.) ultimately which leads to early seizure.10 However, the mechanism behind late seizure is different and may be secondary to gliotic scarring, chronic inflammation, angiogenesis, neurodegeneration, neurogenesis, axonal and synaptic sprouting, selective neuronal loss, and altered synaptic plasticity. It has been observed that PSE stands for about 11% of all adult epilepsy cases above the age of 60 years. However, there is lack of data which can be relied on regarding most important aspect of PSE. Recently, many researchers have come forward with much interest to do study on PSE. Hemorrhagic stroke, severity of initial neurodeficit, patients of older age group, involvement of cerebral cortex, positive family history of seizure, certain genetic factors carry a higher risk of PSE. However, stroke severity judged clinically irrespective of stroke scale used is a major determinant in the development of PSE.6,7,11–13 Electroencephalography can be used as an important diagnostic tool which can detect interictal or ictal abnormalities, especially in nonconvulsive seizures and nonconvulsive status epilepticus. Data collected from various sources clearly indicate that all antiepileptic drugs (AEDs) have more or less similar efficacy in treating patient of PSE. Levetiracetam and lamotrigine are the most commonly used AED in PSE.

To study the prevalence of epilepsy in stroke survivors and also to find out potential risk factors of PSE. 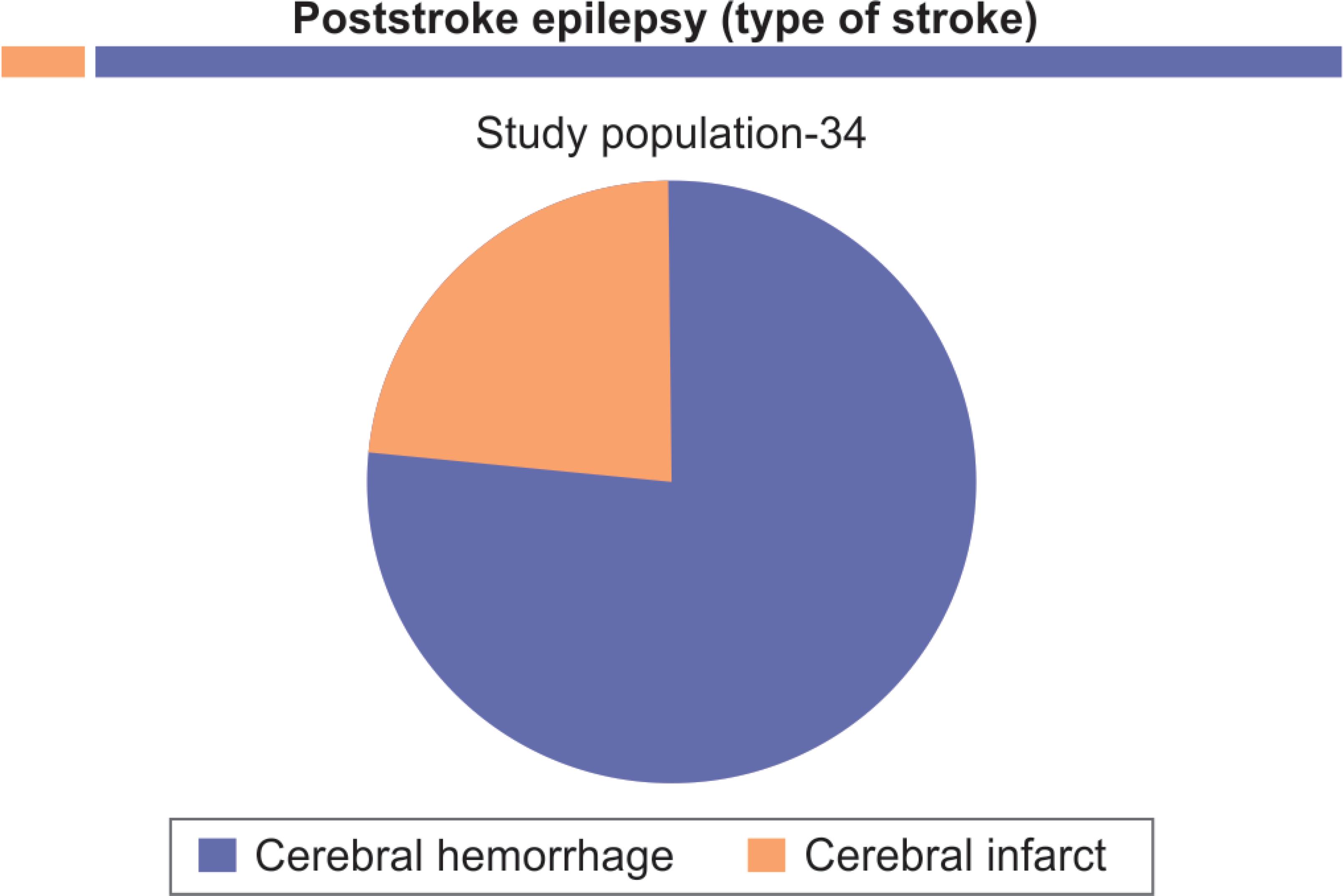 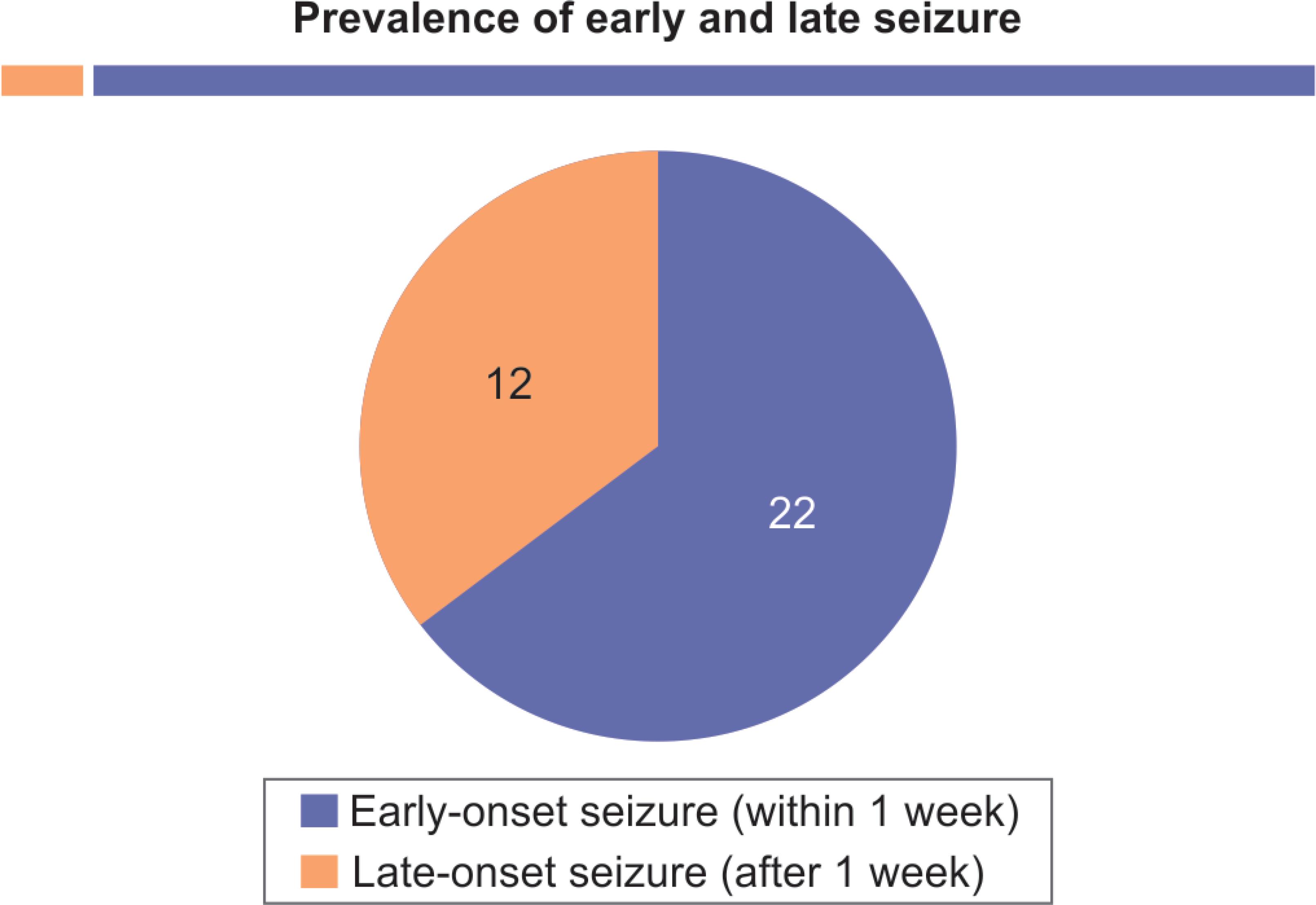 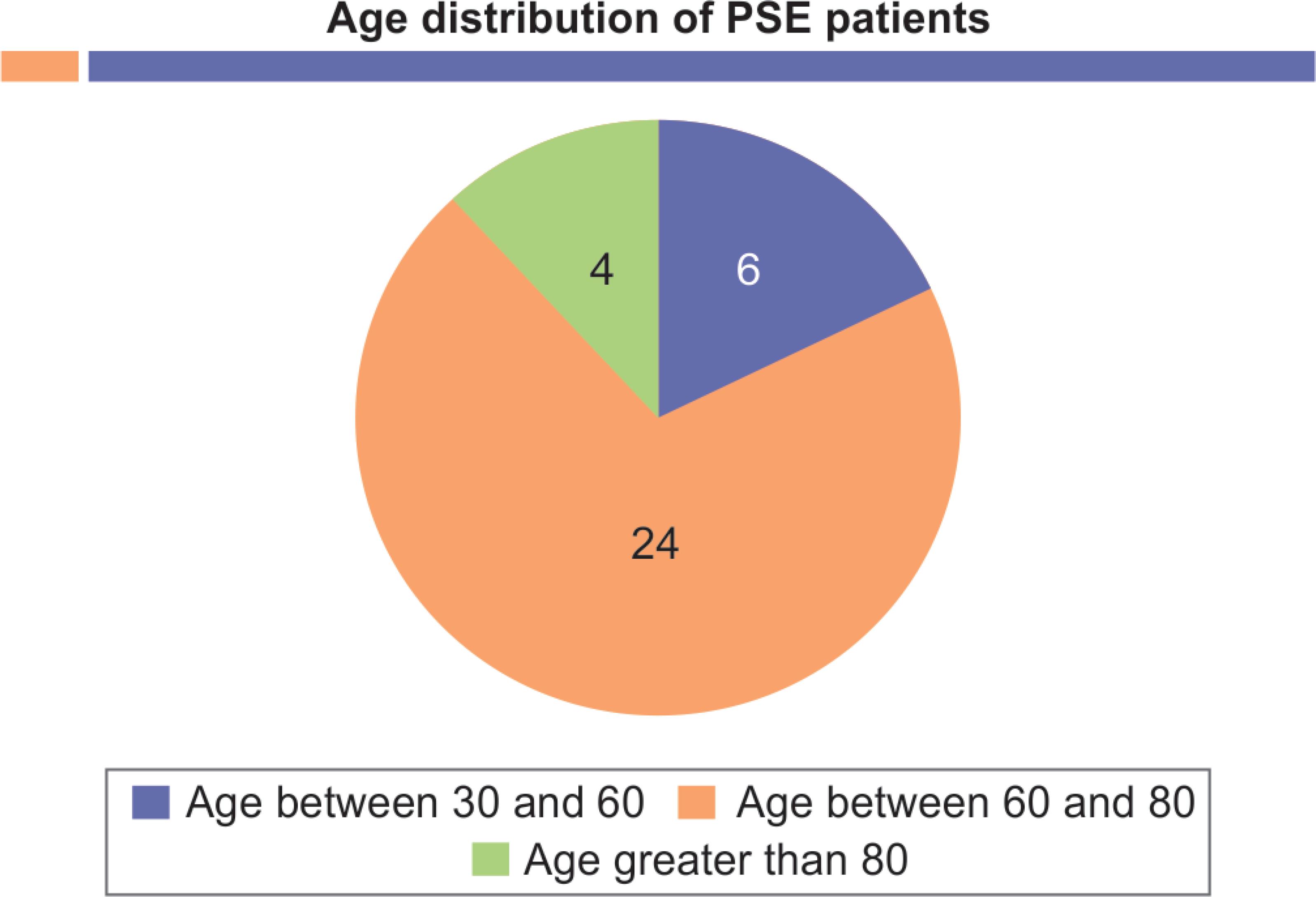 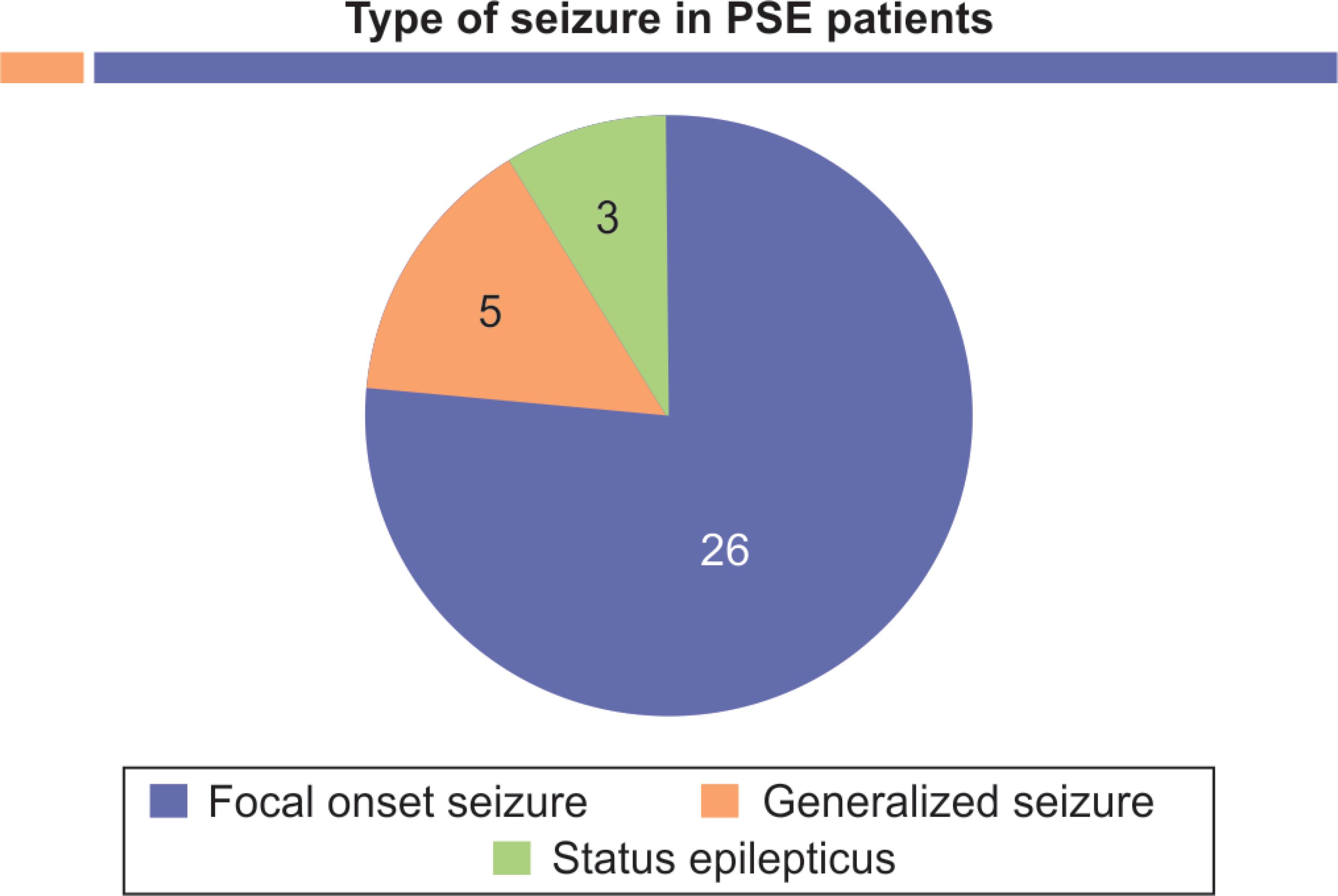 We have found different levels of risk factors for PSE. Most of the patients who had stroke location in the cortical region especially middle cerebral artery lesion presented with PSE. Awada et al., 1999 and Silverman et al., 2002 reported significantly increased probability of PSE involving cortical lesion. Data collected from various studies clearly indicate that there is more incidence of PSE in hemorrhagic stroke patients rather than ischemic stroke6,7 (Arntz et al.; Burn et al.). In our study, we have also found 76.4% PSE patients were hemorrhagic in nature. The mechanism behind PSE following hemorrhage is not very clear. One probable mechanism may be deposition of hemosiderin which ultimately leads to cerebral irritation causing seizure (Silverman et al., 2002). There is very high probability of PSE in subarachnoid hemorrhage as extent of damage of cerebral cortex is often very severe. Poststroke epilepsy often leads to severe initial neurologic damage after stroke. In an important study done by Conrad et al., interesting finding was that there is much more likelihood of PSE in patients who have high National Institute of Health Stroke Scale. In the patient age group greater than 60 years, we found incidence of PSE was very high. In contrast to our study, Graham et al., 2013; Tanaka et al., 2015; Werhahn et al., 2011 found that younger age group carries more risk of developing PSE. Similar to our study, The National General Practice Study of Epilepsy cerebrovascular disease leads to approximately 15% of newly diagnosed epilepsy, and among them 50% was elderly.14 Majority of our patients who presented with PSE was diabetic and hypertensive. Ohman, 1990; Wang et al., 2013 made similar type of observation that hypertensive patients are more prone to develop epilepsy. Twenty-two of our patients presented with early seizure and 12 presented with late seizure. Early and late seizures are very important to distinguish. Olsen, 2001, found that there is high chance of recurrence rate in late seizure (approximately 50%), whereas in comparison early seizure has a low recurrence rate (approximately 30%).

Poststroke seizure although not very frequent but important complication after stroke leads to a worse immediate functional outcome and a high long-term mortality rate. Poststroke seizure also leads to secondary neurological injury, including decreased flow of blood in cerebral circulation and increased intracranial pressure.15–17 (29, 46, 47 article B). There is lack of adequate data to guide regarding prophylactic usage of AED after stroke. According to American Stroke Association, one should not use prophylactic AED in CVA patients including intra cerebral hemorrhage (ICH). European stroke organization also gives the same recommendations in this regard. However, prophylactic AED may be used depending on the clinical scenario. To conclude, physicians must be very cautious while treating stroke patients regarding development of PSE. Since there are various difficulties in designing and conducting clinical studies of PSE such as the high diversity of stroke survivors, much more studies are essential to find out primary and secondary preventions of PSE. 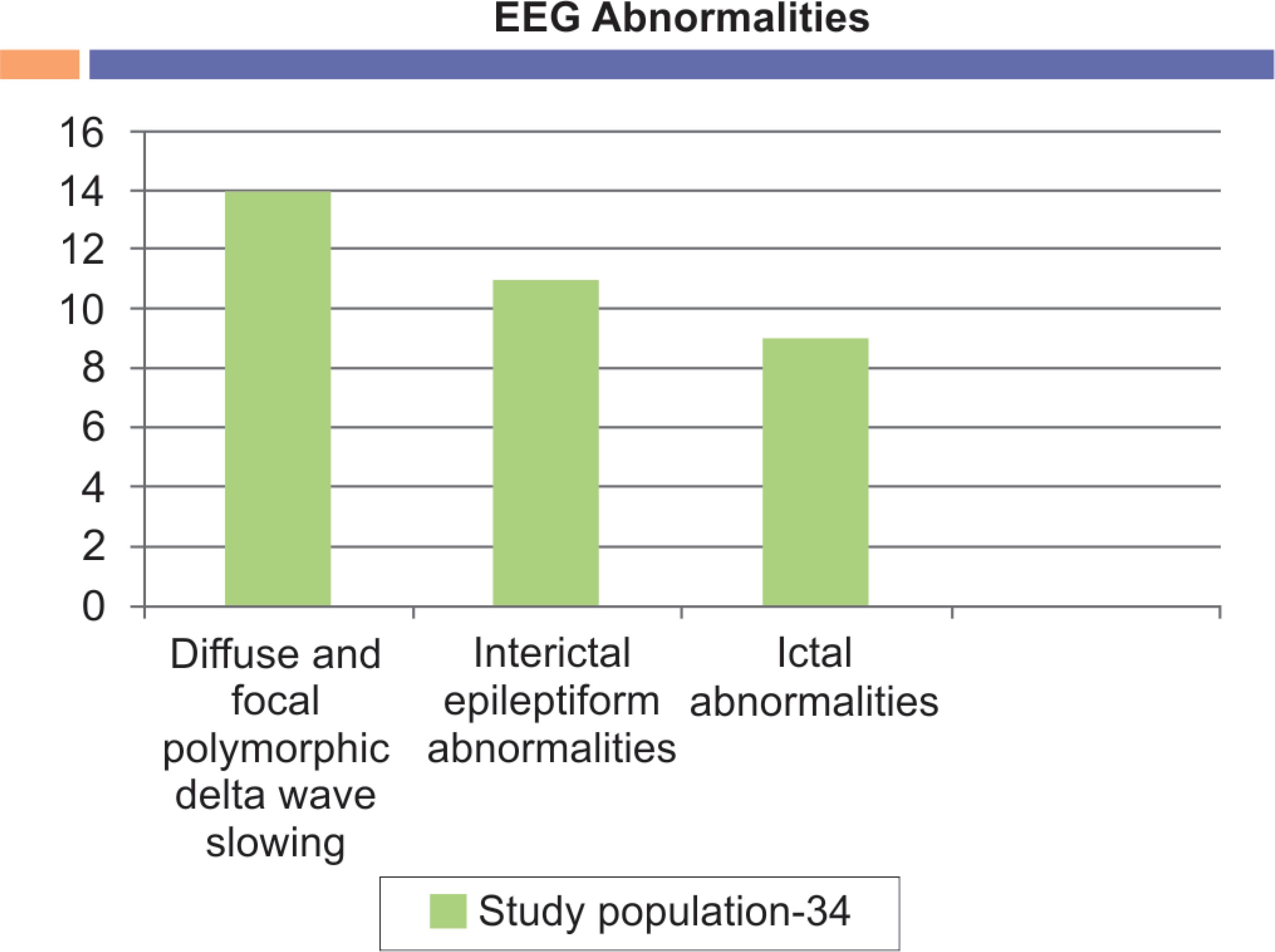