Introduction: Deep brain stimulation of the subthalamic nucleus (STN) is an effective therapy for medically refractory Parkinson’s disease leading to significant improvement of Parkinsonian symptoms through functional inhibition of the STN.

Aim of this study: To analyze the outcome of bilateral subthalamic nucleus, deep brain stimulation in advanced Parkinson’s disease patients. This is a clinical observational study.

Material and methods: This is the result of bilateral subthalamic nucleus-deep brain stimulation (STN-DBS) done in 30 patients for advanced Parkinson’s disease in the Institute of Neurosciences, Kolkata, during the past 7 years (2013 to 2019, August) by the authors team. Outcome had been analyzed.

Results: Excellent outcome was found after the required programming. Ninety percent patients have shown excellent result. The dosage of antiparkinsonian medications was significantly reduced, with a consequent reduction of dyskinesias.

Conclusion: The effect of the STN-DBS on the motor fluctuations and on the levodopa-induced dyskinesias led to a significant improvement of motor part of Unified Parkinson Disease Rating Scale (UPDRS [III]) rating.

Hyperactivity of subthalamic nucleus (STN) plays an important role in the pathophysiology of Parkinson’s disease. Through chronic high-frequency electrical stimulation, it is possible to achieve functional inhibition of STN leading to improvement of Parkinsonian symptoms and significant reduction of dopaminergic drugs with an improvement of drug-induced dyskinesia.1–5

The aim of this study was to analyze the outcome of the bilateral subthalamic nucleus-deep brain stimulation (STN-DBS) for Parkinson’s disease during 2013 to 2019 in the Institute of Neurosciences, Kolkata, by the authors team.

No antiparkinsonism medicine was given in the morning after the last previous night dose to see the clinical effects during awake surgery (Figs 1 to 14).

Antiparkinsonian drugs to be started as early as possible through Ryle’s tube. Pacemaker started “ON” after 48 hours in the low setting.

Patients were usually discharged after 7 or 8 days. The next programming was done after 2 weeks periodically according to clinical effects.

Postoperative CT scan of brain and preoperative MRI had been merged in StealthStation to see the best contacts and stimulated accordingly.

Voltage, pulse width, and frequency had been increased and adjusted according to clinical response.

Hypokinesia, tremor, rigidity, and dyskinesia of 27 patients had improved significantly.

One patient expired due to neurolept malignant syndrome, followed by pneumonia and septicemia.

Two patients had small hematoma along the lead track, resolved with conservative treatment. One of them developed hemiparesis.

Levodopa was stopped in patients with severe dyskinesia with stimulation ON and few other antiparkinsonian medications ON (Tables 2 to 4). 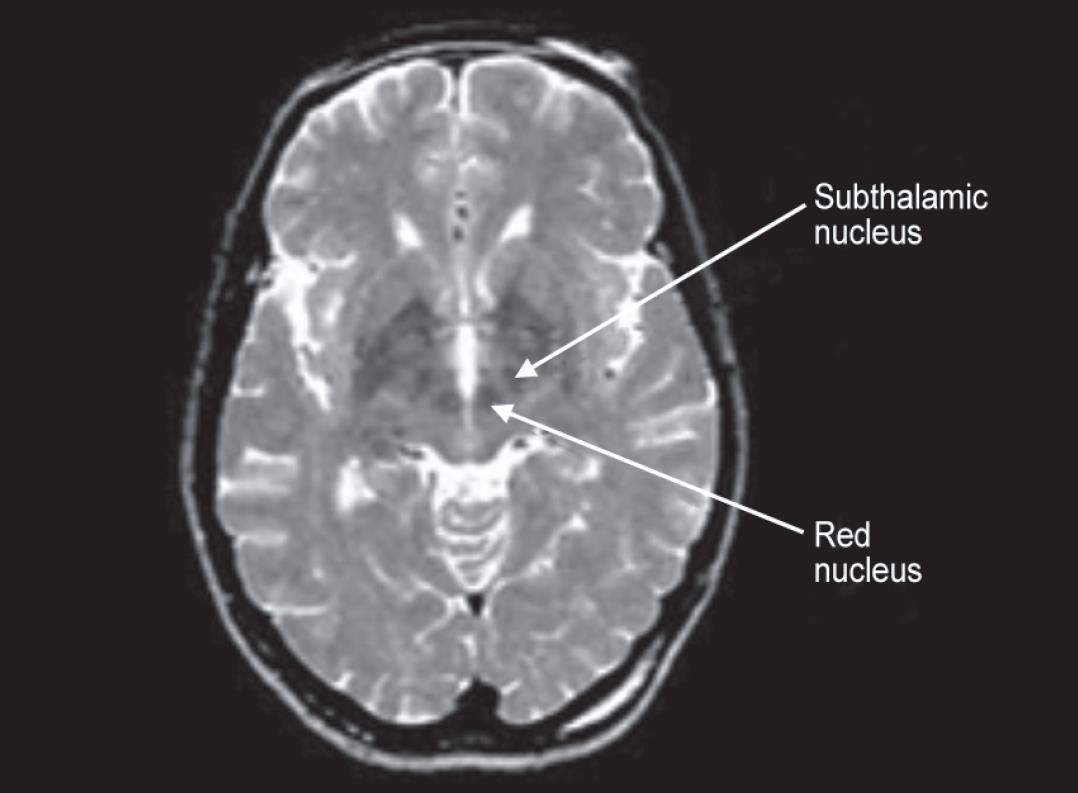 Fig. 2: Location of STN and red nucleus in T2-weighted MRI 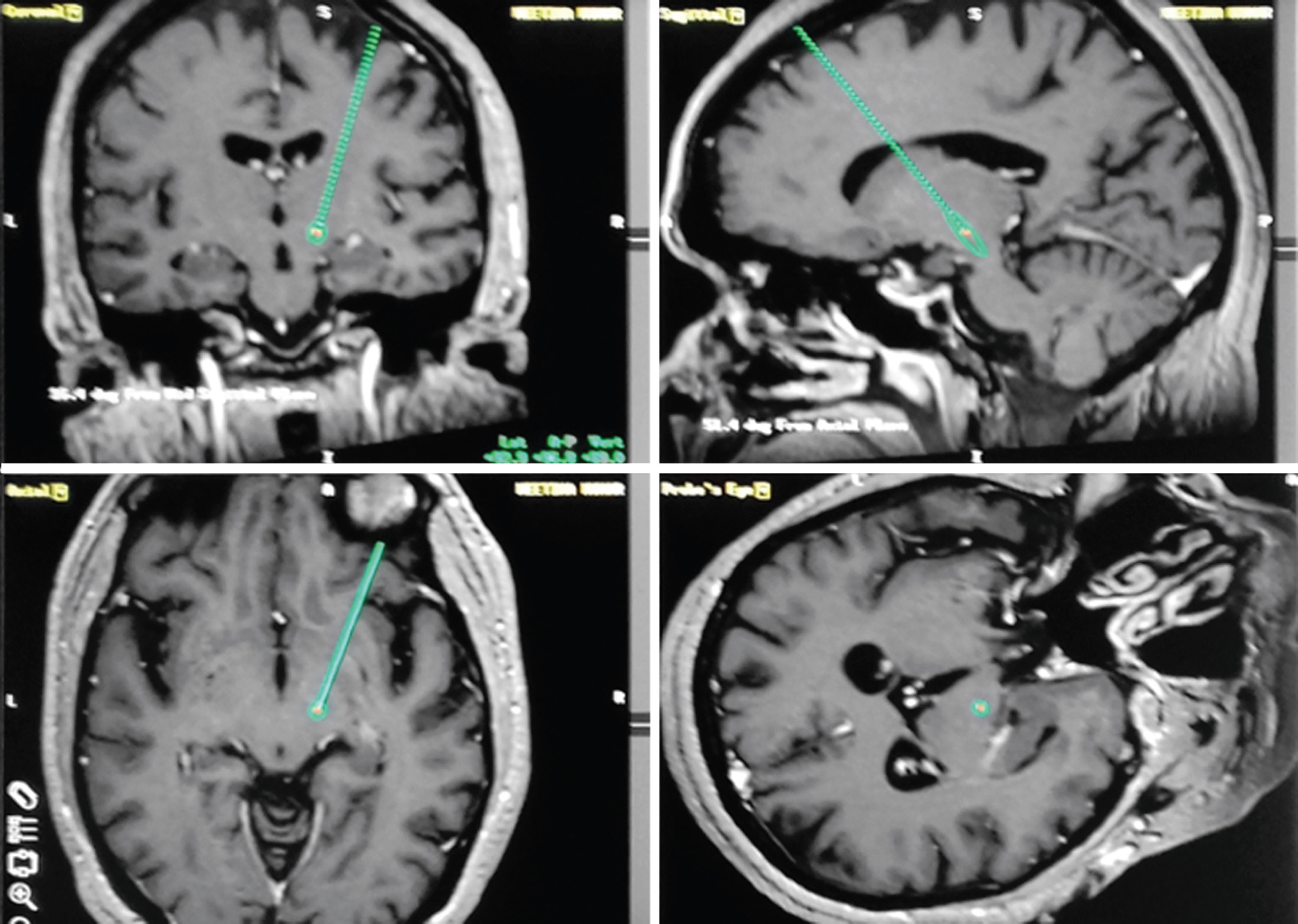 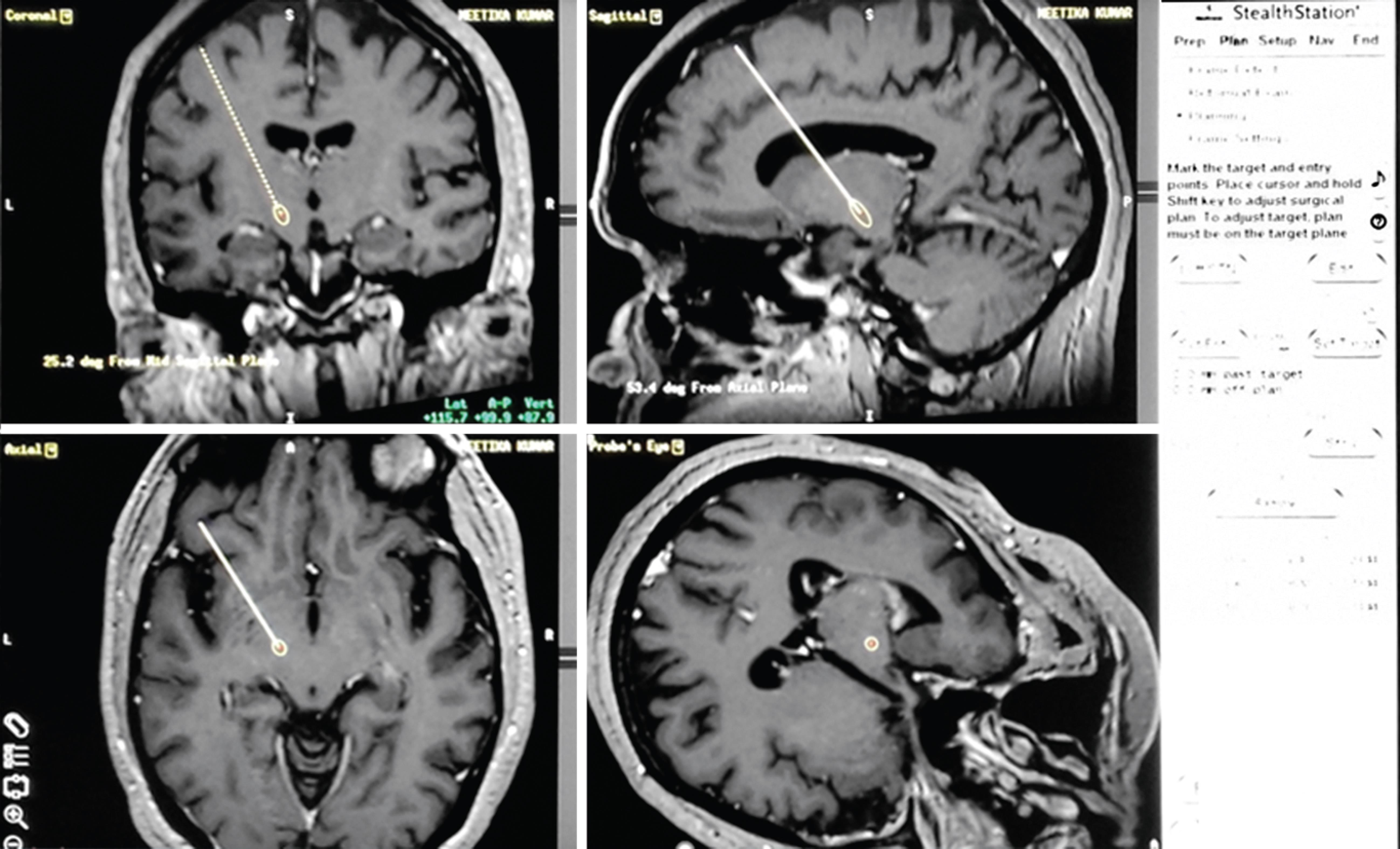 The results of STN-DBS in this small series, therefore, seem to be good, effective, and safe for the treatment of select medically refractory Parkinson’s disease with a overall 5% risk of complications, which is comparable to the existing literature. 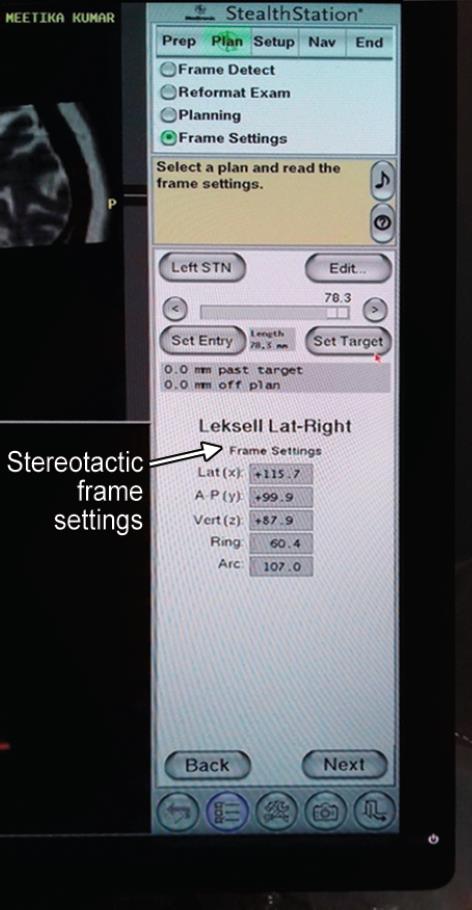 Fig. 5: After selecting target, trajectory and entry point in the computer station based on preoperative MRI, stereotactic coordinates have been generated 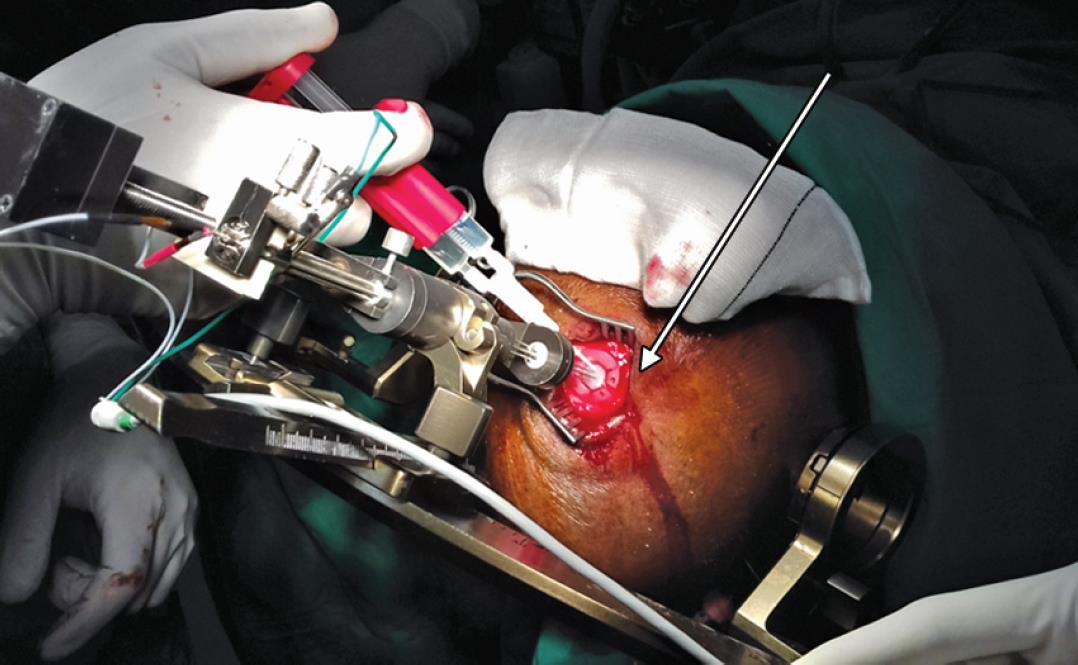 Fig. 6: Burr hole was made at the selected entry point, dura was opened and fibrin glue was given to restrict the CSF egress as CSF egress can cause brain shift resulting malpositioning of lead 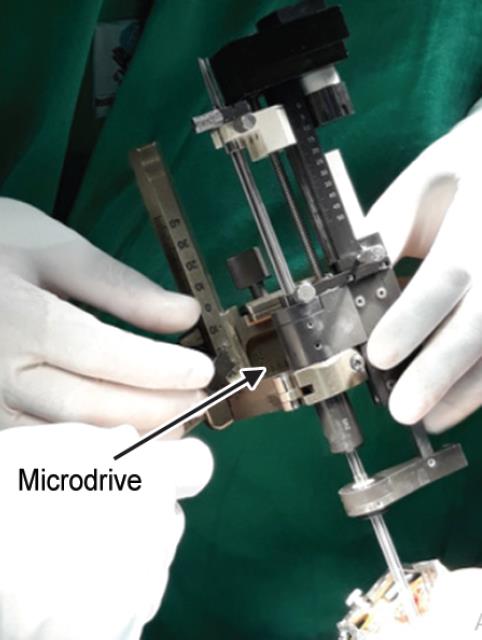 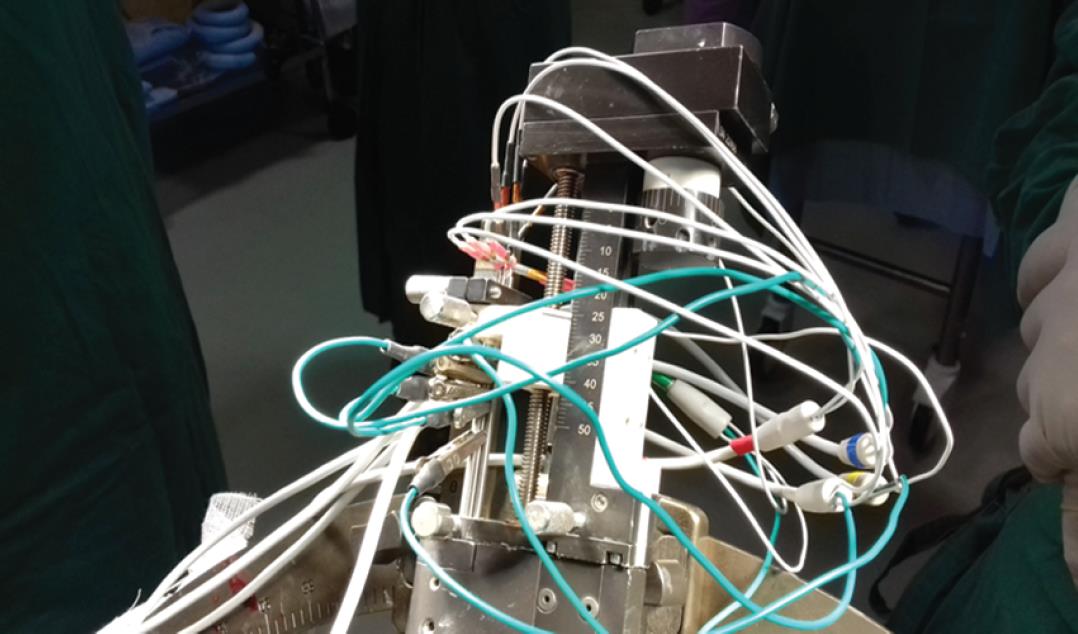 Fig. 8: Microelectrode recording (MER) and microstimulation is going on through microelectrode drive and wires 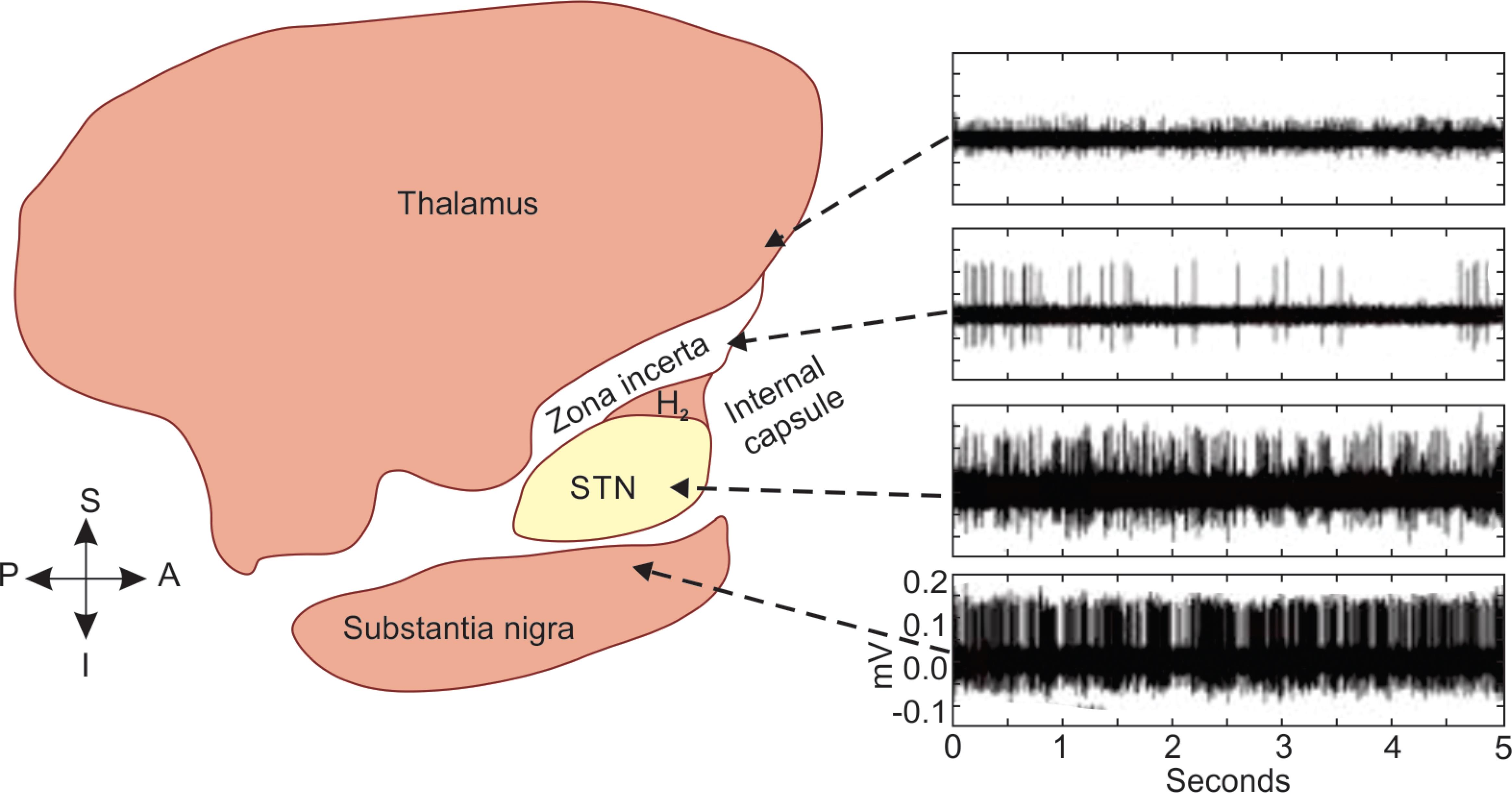 Fig. 9: As the microelectrode (red line) passes through thalamus, zona incerta subthalamic nucleus, and substantia nigra, different electrophysiological graphs will appear, guiding us to know location of the electrode 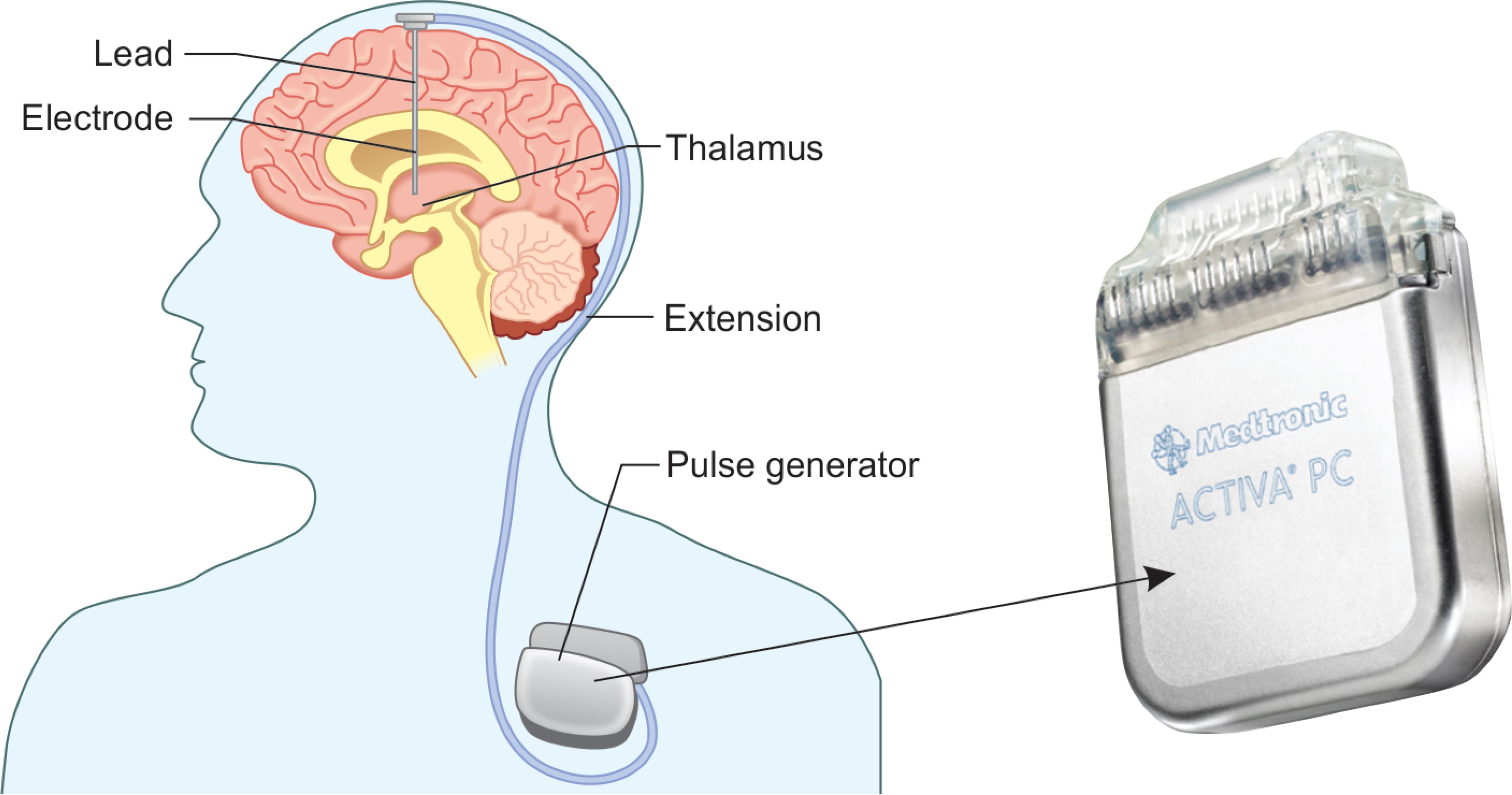 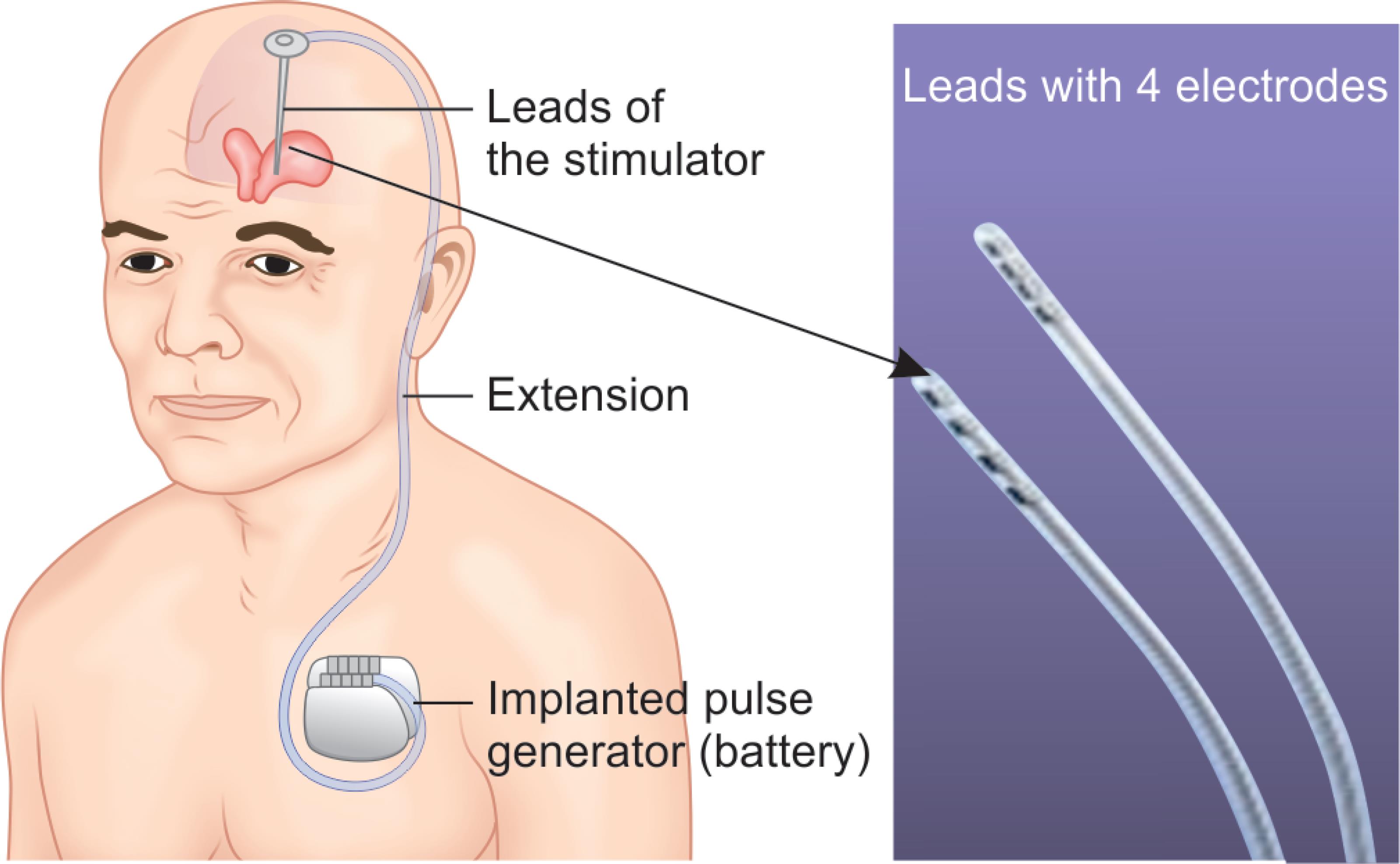 Fig. 12: Leads with four electrodes which remain within STN 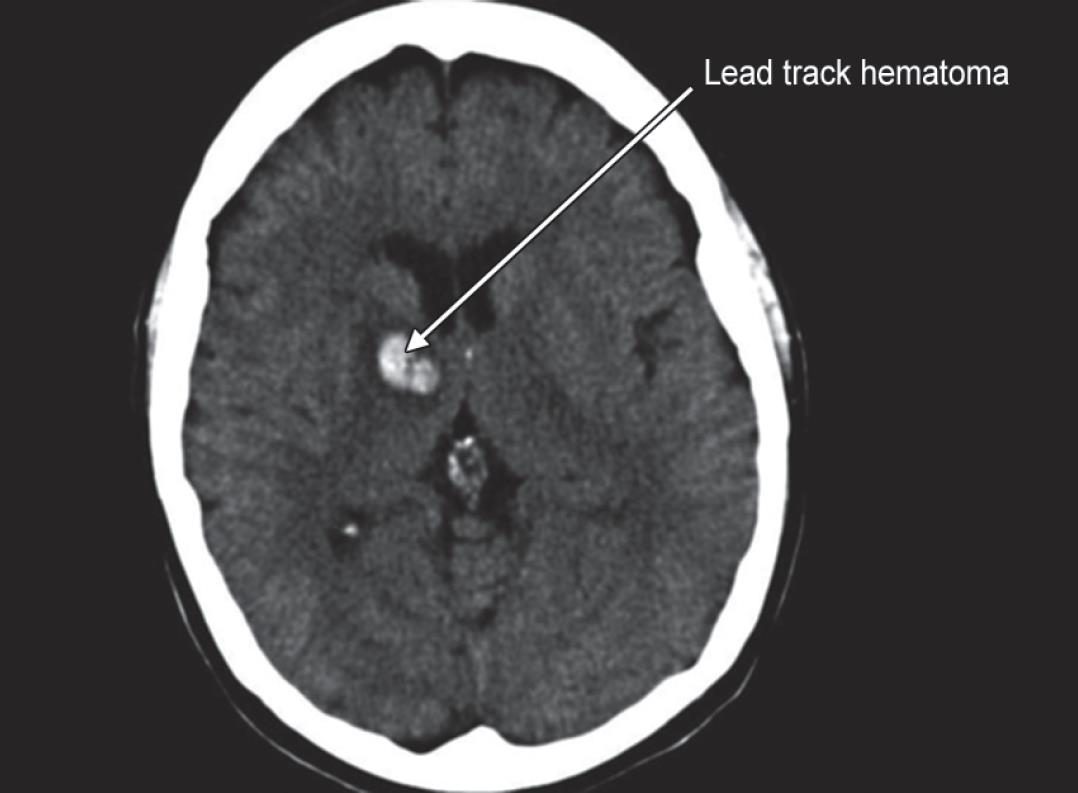