Being one of the top ten causes of death worldwide, tuberculosis (TB) remains to be a major cause of ill health globally. According to Global Tuberculosis Report 2019, an estimated 10 million people were infected with TB and 1.2 million HIV-negative people died of TB in 2018.1

In patients with chronic kidney disease (CKD), the incidence of tuberculosis is 10-fold greater than that of the normal population due to reduced cellular immunity resulting from uremia.2,3

Furthermore, incidences of side effects due to anti-TB drug treatment are more frequently reported in CKD patients.4

Isoniazid, also known as isonicotinic acid hydrazide (INH), is an antibiotic used as one of the first-line drugs in the treatment of tuberculosis. The level of INH in the plasma depends on the genetically determined slow or fast acetylation process in the liver. Since the route of excretion of INH is primarily through kidneys in both free and acetylated forms, the dose of INH may need to be reduced in patients with CKD.5

The neurotoxic side effects associated with INH use are well recognized. These may range from peripheral neuropathy, optic neuritis, encephalopathy, ataxia, dysarthria, and seizure to psychiatric manifestations such as anxiety, depression, paranoia, schizophreniform psychosis, obsessive–compulsive disorder, and mania.6

Mechanism of these effects is inhibition of the phosphorylation of pyridoxine, causing decreased production of pyridoxal-5-phosphate, which is a coenzyme involved in neurotransmission.3

Moreover, decreased acetylation of INH in patients with CKD contributes to a longer half-life of the drug.7

Here, we are presenting a case of encephalopathy in a CKD patient caused by administration of isoniazid for the treatment of Pott's disease of cervical spine.

This 55-year-old Bangladeshi woman, a known case of hypertension, hypothyroidism, diabetes mellitus, and chronic kidney disease, presented with neck pain and low-grade fever. She was diagnosed as a case of Pott's disease of cervical spine on the basis of clinical scenario, X-ray (Fig. 1) and MRI of cervical spine (Fig. 2), and other laboratory evidences.

She has been treated with isoniazid 225 mg/day, rifampicin 450 mg/day, ethambutol 400 mg, pyrazinamide 100 mg, pyridoxine 20 mg, and prednisolone 60 mg after necessary adjustment for impaired renal function. At that time, her serum creatinine was 6.03 mg/dL and surgical intervention in the cervical spine was planned. But after 3 days of treatment, patient became unconscious with estimated Glasgow Coma Score 6. At this point, her serum creatinine (7 mg/dL) and blood urea (218 mg/dL) level were found to be high. Serum electrolyte and RBS were within normal range. She was promptly shifted to ICU where her SGPT, serum albumin, and serum calcium were found to be normal but serum potassium level was mildly raised (5.5 mmol/L). Arterial blood gas analysis revealed metabolic acidosis, complete blood count showed high ESR (98 mm in first hour) and neutrophilia (80%) with leukocyte count (10,600/mm3) at the upper limit of normal value, and urine routine examination showed proteinuria. Anti-TB therapy was stopped immediately. Adrenal insufficiency was excluded by normal ACTH and cortisol level. She was given three sessions of hemodialysis through right femoral venous catheter. She gained full consciousness after 7 days from the first day of hemodialysis. Anti-TB therapy was restarted from the next day with the same previous regimen. She was discharged 7 days after starting therapy during which her serum creatinine was 4.6 mg/dL. She was advised to follow-up after 1 month. But the very next day of discharge, patient complained of anorexia and excessive sleepiness. Three days later, the patient had to get admitted to hospital again due to confusion and breathlessness. On examination, she appeared pale and edematous with puffy face and Glasgow coma score was 8. She received another session of hemodialysis the next day along with sodium bicarbonate and furosemide. She was shifted to ICU again as her condition remained unchanged. Her ABG showed that metabolic acidosis, serum urea (225 mg/dL), serum phosphate (8.7 mg/dL), and serum creatinine (9.5 mg/dL) were also found to be high, whereas serum ammonia (18 μmol/L), serum electrolyte, liver enzymes, and prothrombin time were normal. Blood culture yielded no growth, but urine culture yielded growth of ESBL-positive E. coli. Another session of hemodialysis was given, and anti-TB therapy was stopped. Patient was shifted to general ward after 4 days, but she was still drowsy with GCS 12. In 11 days, she was fully alert and oriented. In the meantime, CT-guided FNAC from C5 vertebral body revealed tubercular granulomatous inflammation (Fig. 3), which impelled us to restart anti-TB therapy again. 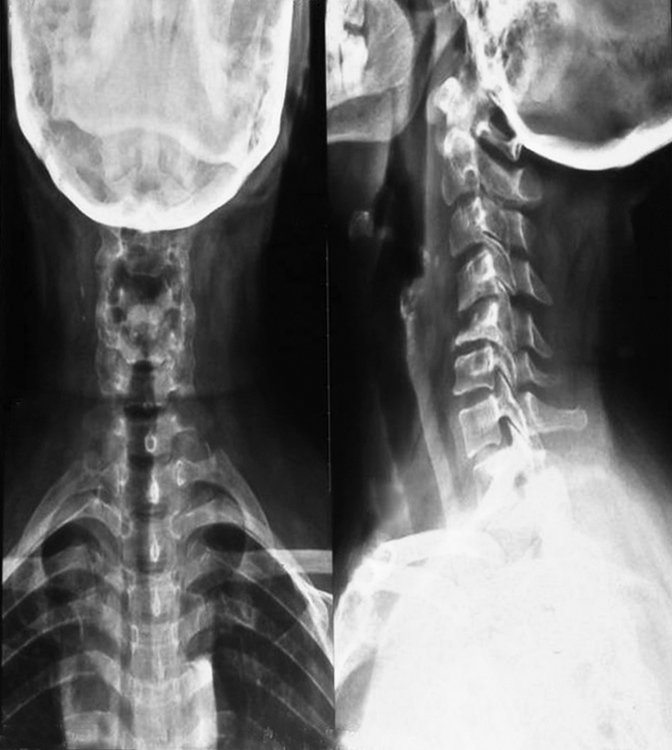 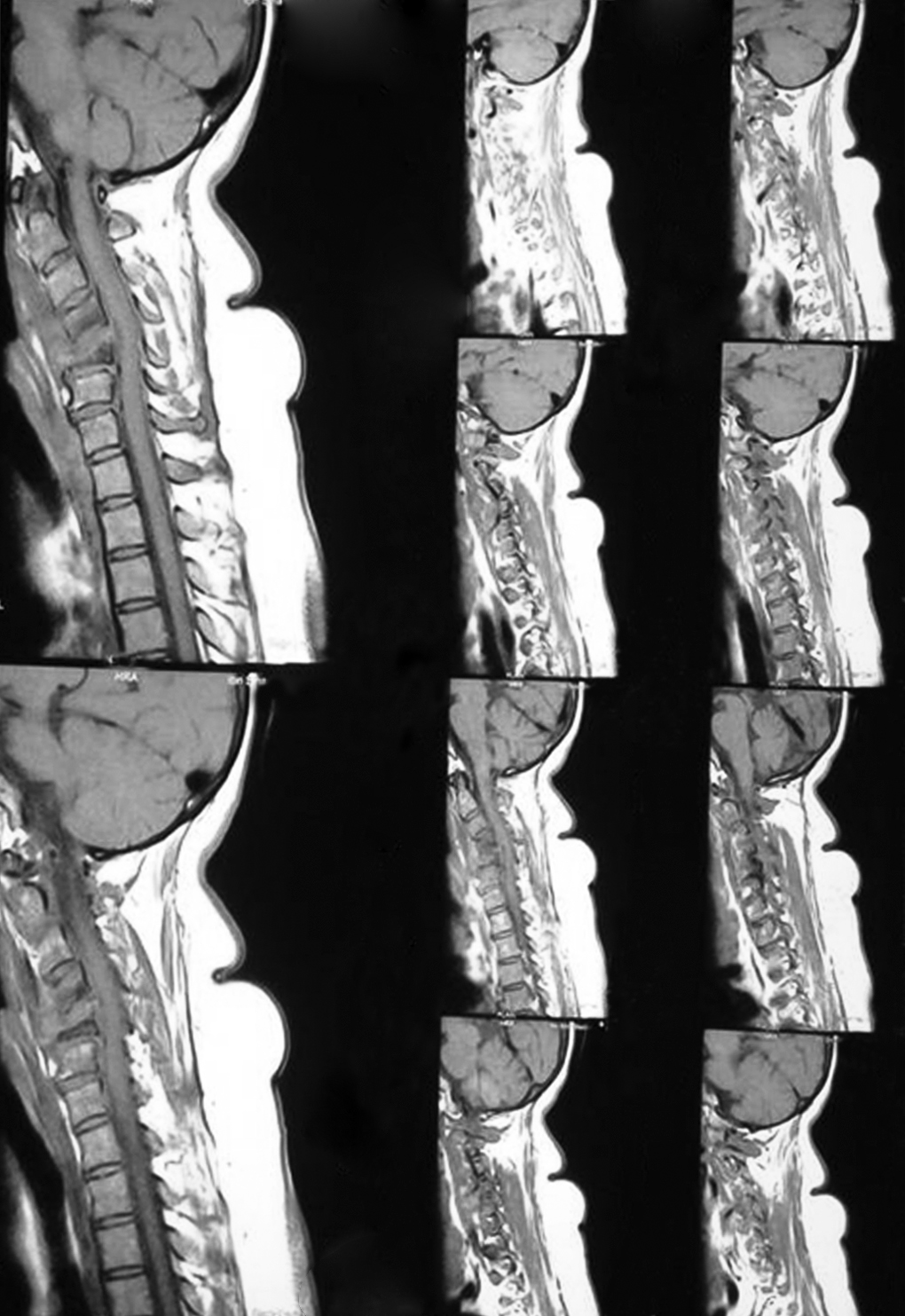 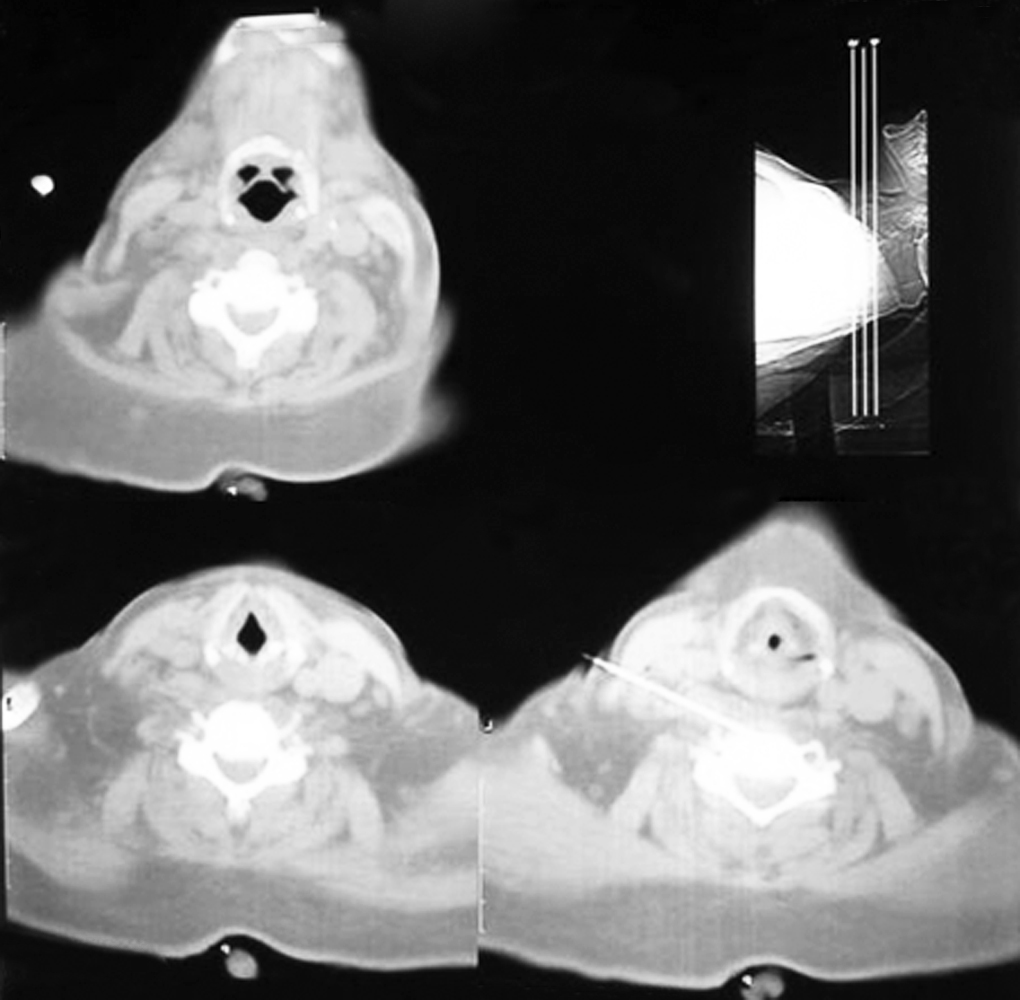 As a temporal relationship between anti-TB therapy and recurrent unconsciousness was anticipated, decision was taken to reintroduce anti-TB drugs one by one in incremental doses. Isoniazid was the first drug to be reintroduced, followed by ethambutol. But both the drugs were omitted as the patient became drowsy on the seventh day of starting isoniazid (and second day of ethambutol). Since the patient's orientation improved, pyrazinamide was reintroduced after 7 days, followed by rifampicin and ethambutol again along with prednisolone. Expected full dose of anti-TB therapy was restarted within 1 month, which consisted of rifampicin, ethambutol, pyrazinamide, and prednisolone. There was no incidence of unconsciousness or drowsiness since then and no side effects identified in the subsequent follow-ups. No hemodialysis required during anti-TB therapy though A-V fistula was constructed with the aim of long-term renal replacement therapy. Her last serum creatinine was 6.01 mg/dL.

Isoniazid-induced encephalopathy is basically diagnosed clinically by the exclusion of other infective causes or metabolic disturbances. In this patient, the diagnosis is strongly supported by temporal relationship between the onset of altered consciousness and the initiation of INH therapy (4–14 days), completed recovery (within 1 week) after cessation of the drug, and reproducibility of symptoms on reintroduction of the drug. The clinical features and investigation workups render the diagnosis of other conditions like septicemia, electrolyte imbalance, hypertensive encephalopathy, Wernicke's encephalopathy, aluminum toxicity, uremic encephalopathy, hepatic encephalopathy, acute disequilibrium syndrome, and cerebrovascular diseases unlikely.

INH treatment may increase the risk of developing pellagra by reducing the conversion of tryptophan to niacin. Pellagra psychosis may be mistaken for INH-induced encephalopathy where typical dermatitis or diarrhea is absent.10 However, our patient showed complete resolution of symptoms on stopping INH only and no niacin replacement needed, which made the diagnosis of pellagra less likely.

Though plasma levels of INH and acetylator status were not determined in our patient, her Asiatic origin does not render her to fall under slow acetylator phenotype.

The mechanism of INH-induced encephalopathy is still obscured. It may be caused by INH-induced deficiency of pyridoxine and pyridoxal phosphate, which act as the coenzymes for the production of synaptic transmitters.6

INH-induced encephalopathy can be developed any time between first few days to 5 months after initiation of INH therapy. On the contrary, recovery is more predictable, usually within 1 week of stopping of INH.11

Nevertheless, some authorities recommend a higher dose of pyridoxine to prevent INH-induced encephalopathy in CKD patients.8

In conclusion, isoniazid-induced encephalopathy should be kept in mind when patients with CKD under treatment with INH develop confusion. Early recognition of such diagnosis can be crucial because cessation of the drug can result in complete recovery of the patient.