How to cite this article: Mahapatra GS, Shah KA, Chandra A, et al. A Study on the Clinico-etiological Profile of Cirrhosis of the Liver and Prognostic Value of the MELD Score on Short-term Survival. Bengal Physician Journal 2020;7(3):57–59.

Introduction: Although there are a large number of patients with chronic liver disease (CLD) in India, the clinico-etiological profile of cirrhosis of the liver and exact prognostic value of the model for end-stage liver disease (MELD) score on short-term survival is scarce, and it needs further evaluation.

Aims: To study the etiology of cirrhosis of the liver; observe the clinical manifestations at the time of presentation and the subsequent development of complications in patients having cirrhosis; and calculate the MELD score and assess its usefulness as a prognostic marker in short-term survival of patients with cirrhosis.

Methodology: A prospective longitudinal study was performed on 50 patients who presented to our institution with CLD. Patients were subjected to clinical examination and laboratory investigations. The severity of the liver disease was assessed by the MELD score.

Conclusion: Alcohol was the most common etiological factor for cirrhosis in our study. Three-month survival rates were inversely related to the MELD score.

Cirrhosis of the liver is pathologically defined as a diffuse parenchymal injury to the liver and subsequent fibrosis along with distortion of the hepatic architecture and regenerative nodule formation.1 Prognosis in patients with cirrhosis has been within the easy clutch of the treating physician because of the availability of the model for end-stage liver disease (MELD) scoring system which is well validated for prognostication related to survival of such patients.2 It was developed initially to assess the risk of death of patients within the first 3 months after the transjugular intrahepatic portosystemic shunt (TIPS) surgery, and later, it was used to determine the prognosis and prioritize the allocation of liver transplantation. It is calculated according to the following formula:

A prospective longitudinal study was performed at Calcutta National Medical College on 50 patients with cirrhosis of the liver within first 9 months of this study, and they were followed up for 3 months after the first visit. In the study, the etiological factors of cirrhosis of the liver, clinical manifestations at presentation and subsequent development of complications, and survival of patients at 3 months in relation to the MELD score were analyzed. A detailed history, thorough clinical examination, and necessary investigations [liver function test, serum creatinine, prothrombin time/international normalized ratio (INR), MELD score, serum ferritin, transferrin saturation, ceruloplasmin, 24-hour urinary copper, ultrasonography of abdomen, upper gastrointestinal endoscopy, autoimmune panel, slit lamp examination, CT scan whole abdomen, ascitic fluid study, liver biopsy] were performed in patients for the diagnosis of cirrhosis and to determine its etiology and the presence of various complications. Patients were followed up in the outpatient department at monthly interval for 3 months.

In our study population, there were 50 patients (males 72% and females 28%). We found that alcohol was the most common etiological factor for cirrhosis (60%), followed by cryptogenic (22%), autoimmune hepatitis (6%), Wilson’s disease (6%), alcohol with hepatitis B (4%), and hepatitis C (2%). The frequency of different etiologies of CLD in our study has been depicted in Table 1. 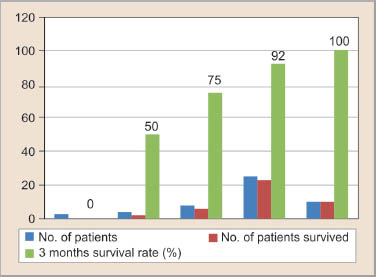 Fig. 1: Diagrammatic representation of 3-month survival rate according to the MELD score

Cirrhosis of the liver is defined as the distortion of hepatic lobular architecture along with fibrosis and subsequent conversion of the normal hepatic architecture into regenerative nodules.1 Chronic liver disease (CLD) is one of the most important causes of mortality and morbidity worldwide, which is responsible for around 2 million deaths each year.3 Cirrhosis has been seen as the 11th most common etiology of death worldwide, and hepatocellular carcinoma is also a very important etiology; when combined, they account for about 3.5% of all deaths globally.4 Alcoholic liver disease and postnecrotic cirrhosis following viral hepatitis are the two most common causes of cirrhosis.5 Among the other etiologies, nonalcoholic steatohepatitis, autoimmune hepatitis, and several storage and metabolic disorders are common.6-8 As per the latest World Health Organization data which were published in 2017, the total number of deaths due to liver diseases was 259,749 or 2.95% of the total number of deaths, which is about one-fifth (18.3%) of the global deaths due to cirrhosis.9

Although there are many studies on the etiological spectrum of CLDs in India, most of them are cross-sectional studies.10,11 The knowledge regarding the etiological spectrum of CLD is very essential for effective planning and formulation of health-related policies, especially in low- to medium-income countries, such as India. It is seen that most of the causes of CLD are preventable, and some of them are completely or partially treatable; therefore, one of the objectives of our study was to analyze the etiologies of cirrhosis of the liver. The MELD score is calculated with the help of the following formula:

In our study, we tried to evaluate 3-month survival in different stages of cirrhosis of the liver based on the MELD score. In our study population, there was a statistically significant difference in terms of mortality in those with a MELD score of more than 20 (8 of 15 patients died, i.e., 46.7%) than in those with a score of less than 20 (2 of 35 patients died, i.e., 5.7%). Giannini et al. found similar results in their study of the aminotransferase ratio and MELD score in cirrhosis.17 In their study, they showed that a MELD score >9 was associated with significantly reduced survival. Another study by Heuman et al. also concluded that in those with a MELD score <21, only reduced levels of serum sodium and persistent ascites were the two important independent risk factors of mortality, and in those with MELD scores >21, the MELD itself was the independent predictor.18 In our study, we also confirmed the prognostic ability and accuracy of the MELD scoring system.