Resurgence of Scrub Typhus: An Overview

Scrub typhus is a widely neglected disease, which is gaining global momentum because of its resurgence patterns. The disease is now being reported in newer regions as well aspreviously endemic areas, being called as “tsutsugamushi triangle.” Typhus is a Greek word meaning fever with stupor.

It is a re-emerging acute infectious zoonotic disease, which can get transmitted from animals to humans or, to be more specific, a disease that usually exists in animals but can cause human infections. Scrub typhus is a very serious health problem of the Asia-Pacific region; particularly endemic in “tsutsugamushi triangle” (Fig. 1) extending from Afghanistan to China, Korea, Indonesia, and in Pacific islands including part of Australia.1 This triangle is named after the causative organism Orientia tsutsugamushi.This traditional triangle includes almost upper half of India, that is northeast and northwest parts of India. 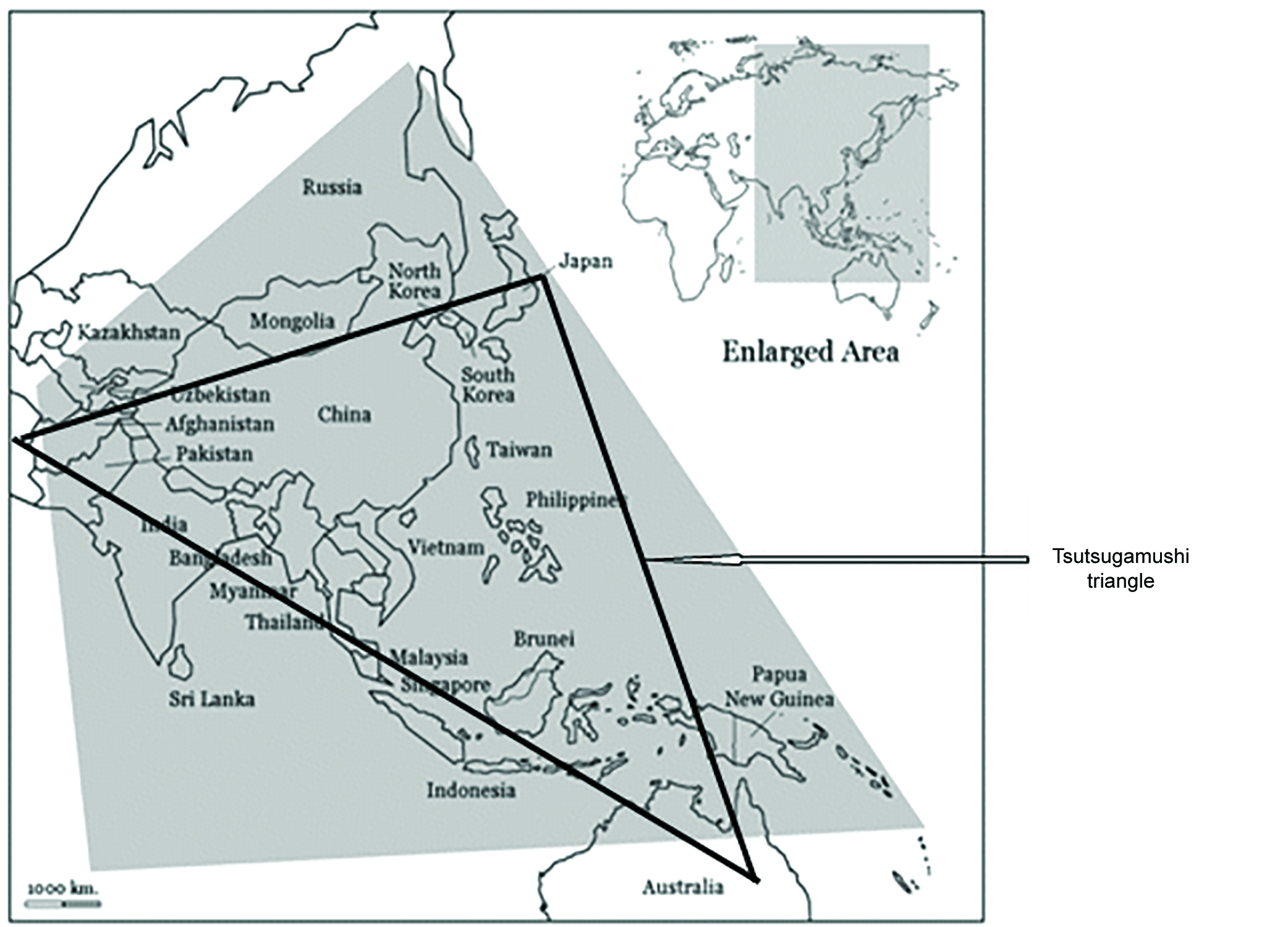 Fig. 1: Tsutsugamushi triangle (shown above): Scrub typhus is endemic in much greater area than this specified triangle

This traditional triangle includes almost upper half of India, that is northeast and northwest parts of India.

Scrub typhus was first described in Japan in the year 1899.3 In India, it was one of the major causes of febrile illness among the military personnel in world war II along Assam-India Myanmar (Burma) border and in 1965 Indo–Pak war.4 Now in the Indian subcontinent, scrub typhus is the most common rickettsial infection. It occurs all over India from the southern part to northern India to northeast states and central India. It occurs mainly during rainy seasons and affects all ages and both sexes with male preponderance.

Scrub—the type of foliage (topography between woods and clearings) which harbors the vector.

O. tsutsugamushi, a member of the Rickettsiaceae family, is an obligate intracellular gram-negative bacteria. It differs from other members of Rickettsiasince it lacks lipopolysaccharides and peptidogly can on its cell wall and has no outer slimy layer.

The true reservoir of infection is the trombiculid mite. Chigger mites are the primary reservoir for O. tsutsugamushi. The microbes are transmitted transovarially in mites from adult to eggs and from the eggs to the larva or adult through transstadial transmission. Thus, they maintain infection throughout their life stages. Larval stage (chigger) acts as a reservoir as well as a vector for infecting humans and rodents. Small rodents are secondary reservoirs. Humans are accidental hosts. They acquire the disease by the bite of infected chiggers. No direct person-to-person transmission occurs.

O. tsutsugamushi is the causative agent and gets transmitted through the bite of thrombiculid mites—the vector. The chigger (larval) phase is the only stage that is parasitic on animals or humans.

Chiggers normally feed on thin, wrinkled, and tender skin with the formation of eschar. Common sites are below the umbilicus, in axillae, neck region, chest, and abdomen.

Eschar may format the inoculation site where the chigger feed. Here, it produces a painless punched-out ulcer that becomes necrotic with a black crust, surrounded by an erythematous margin.

Illness varies from mild to fatal disease; the majority presenting as an acute undifferentiated fever with nonspecific symptoms and signs.

Painless punched-out ulcer with a black necrotic center surrounded by erythema, resembling a cigarette burn. Usually single, but multiple eschar may be found.

Site: Usually found at sites of opposing skin surfaces like axilla, groin, inguinal region but may also be found in neck, chest, and abdomen.

Eschar may resolve without any sequel in 3–4 weeks.

Sometimes scarring or pigmentation may develop.

If present, it is the single most important clue for diagnosis.

Nonpruritic maculopapular rash develops in fewer than 40% of patients. It is usually seen around 5–8 days after onset of fever, typically begins in trunk and spreads to extremities. Face is also often involved.

In severe cases, microangiopathies involve multiple organs. Complications are usually developed after first week of sickness. It is directly related to tsutsugamushi level in the blood.

Pulmonary complications: Well documented complication—ARDS. The primary pathological process of lung involvement is interstitial pneumonia associated with or without vasculitis. Oldage, thrombocytopenia, and the presence of early pneumonitis are the risk factors for the development of ARDS.

In a patient with undifferentiated fever, scrub typhus is diagnosed based on a high level of clinical suspicion.

Leukocytosis or leucopenia may be present, but mostly normal WBC count. Lymphocyte count is decreased. Thrombocytopenia may be sufficient to cause bleeding. Liver enzymes are elevated in 75–95% cases. There may be increased bilirubin, raised alkaline phosphatases, hypoalbuminemia, and raised creatinine.

The most commonly reported abnormalities in chest X-ray include bilateral, diffuse, and reticulonodular opacities.6,7 There may be minimal pleural effusion, hilar adenopathy and nonhomogenous opacities, and cardiomegaly.

Weil–Felix Test:Most cost effective and most widely available serological test. It detects cross reacting antibodies to proteus mirabilisOXK. This test is of little value in the early diagnosis of scrub typhus since agglutinating antibodies IgM are detected only after 5th day of sickness and not before the appearance of the characteristic rash. The diagnostic test shows greater than four times rise in titer to OXK in paired serum taken 2 weeks apart during the febrile period. However, the test lacks sensitivity and specificity. Only less than 50% of those infected with scrub typhus have a strongly positive or rising Weil–Felix titer. Scrub typhus reinfection does not usually cause a second rise in the titer of OXK agglutinins.

ELISA:Qualitative ELISA for detection of IgM antibodies is now commercially available. Primary infection leads to a rapid rise in IgM antibody titer within 8 days, while reinfection is detected by the sharp rise of IgG titer with a variable IgM response.

In the clinical setting, if a patient with AFI presents with eschar and a reactive IgM ELISA for scrub typhus, the diagnosis is considered. Even when an eschar is absent, a diagnosis of scrub typhus has to be considered if IgM ELISA is positive and there is defervescence occurring within 48 hours of initiation of doxycycline treatment, provided other causes of AFI have been ruled out with appropriate investigation.8

Treatment should be initiated early based on a presumptive diagnosis. Rapid defervescence is highly characteristic and so it is used as a diagnostic test. Fever normallysubsides within 24–72 hours of starting the antibiotic.

Doxycycline 100 mg twice daily orally for 7–14 days is the treatment of choice. Treatment for a shorter duration may cure the disease but it is associated with relapse.

Tetracycline 500 mg four times daily for 7–14 days may be used with similar efficacy as doxycycline.

For pregnant women and small children, the drug of choice is azithromycin. It is also recommended in doxycycline-resistant cases. Although it is used as 500 mg once daily for 3–5 days, the exact dose and duration are not clear as yet.

Though rifampicin can also be used as an alternative drug, it should not be used alone because of the possibility of development of resistance. It may be used in combination with doxycycline or azithromycinin places where there is an inadequate response to doxycycline alone.10 However it should be avoided in tuberculosis endemic areas like India.

Chemoprophylaxis—Doxycycline 200 mg once weekly is found to be effective.10 It should be considered for nonimmune people and in high risk travellers.

Vaccine: There is no effective vaccine due to large amount of antigenic variation.10

REASONS FOR RESURGENCE OF SCRUB TYPHUS

A tremendous explosion of scrub typhus over a decade has been observed and the following factors could be attributed for this.