Background: Liver cancer is currently the second-most common cause of cancer-related deaths worldwide and hepatocellular carcinoma (HCC) accounts for more than 90% of liver cancers. Patients with terminal HCC are those presenting with very poor Eastern Cooperative Oncology Group (ECOG) Performance Status 3–4 with tumors beyond the transplantation threshold. Their management of terminal HCC is only palliative support. Oncoxin is a nutritional supplement that is used as an over-the-counter nutritional prophylaxis for cancers. Our aim was to evaluate the effect of Oncoxin in terminal HCC patients along with the best supportive care (BSC), comparing that to the terminal-stage HCC patient only treated with BSC to determine the survival outcome as well as performance status, assessed by the ECOG Performance Status Scale.

Materials and methods: This was a randomized control trial conducted at the Hepatology Department, Bangabandhu Sheikh Mujib Medical University (BSMMU) from December 2019 to February 2021. A total of 60 patients were included (30 patients for Oncoxin with BSC and 30 patients for BSC only) and randomized into two groups. They were followed up for 3 months.

Conclusion: The study shows that Oncoxin appears to increase the survival of some, but not all, patients with terminal-stage HCC. The improvement of ECOG Performance Status was also observed.

Oncoxin is used as nutritional prophylaxis for cancers. It acts by the antioxidant effect and activating the immune system. Oncoxin inhibits the proliferation of HCC cell lines in a time and dose-dependent manner. The effect of Oncoxin is due to the induction of cell cycle arrest in all phases in HCC cell lines. Oncoxin has anticancer and anti-inflammatory actions. It stimulates cancer cell apoptosis, thus inhibiting cancer cell proliferation and differentiation, angiogenesis, invasion, and metastasis. It also stimulates anti-inflammatory cytokines and other cytokines and at the same time inhibiting pro-inflammatory cytokines (Table 1).

Best supportive care is defined as the best supportive treatment measures for cancer patients. The European Organization for Research and Treatment of Cancer (EORTC) defines BSC as, “supportive treatment interventions for cancer patients encompass the multiprofessional approach to the individual all-encompassing physical, psychosocial, spiritual, and cultural needs and should be available at all times of the illness for patients of all ages and regardless of the current treatment intention of the interventions directed against the illness.” This is an approach that improves the quality of life of patients through the management of pain as well as other physical, psychosocial, and spiritual problems.

This was a randomized control trial conducted at the Department of Hepatology, BSMMU, Dhaka, from December 2019 to February 2021. The research protocol was approved by the Institutional Review Board of BSMMU. Sixty patients of HCC were included. Patients with ECOG Performance Status >2, age >18 years, and of both sexes were included. Patients diagnosed with another cancer in addition to HCC, with comorbid conditions like severe CCF, IHD, recent MI, COPD, CKD, etc., and patients of HCC with ECOG Performance Status <2 were excluded from the study. A written informed consent for inclusion in the trial was obtained from the patients, who were randomized into two different groups. One group was selected for the Oncoxin therapy with BSC (Oncoxin group) and another was selected for only BSC (BSC group). Oncoxin group patients received Cap. Oncoxin (300 mg) thrice daily by mouth in addition to BSC. BSC group patients received only the BSC.

All patients were followed up for at least 3 months or up to death. Adverse events were closely monitored. The death of admitted patients was recorded physically and those who died outside were recorded over the telephone.

Socio-demographic profile and baseline clinical presentations of study participants (n = 60) are shown in Table 2. The mean age was 49.67 ± 11.046 years in the Oncoxin group and 46.87 ± 10.030 years in the BSC group. There was male predominance in both groups and in both groups, abdominal pain was the most common presentation. Table 3 shows the baseline biochemical profiles of study participants. 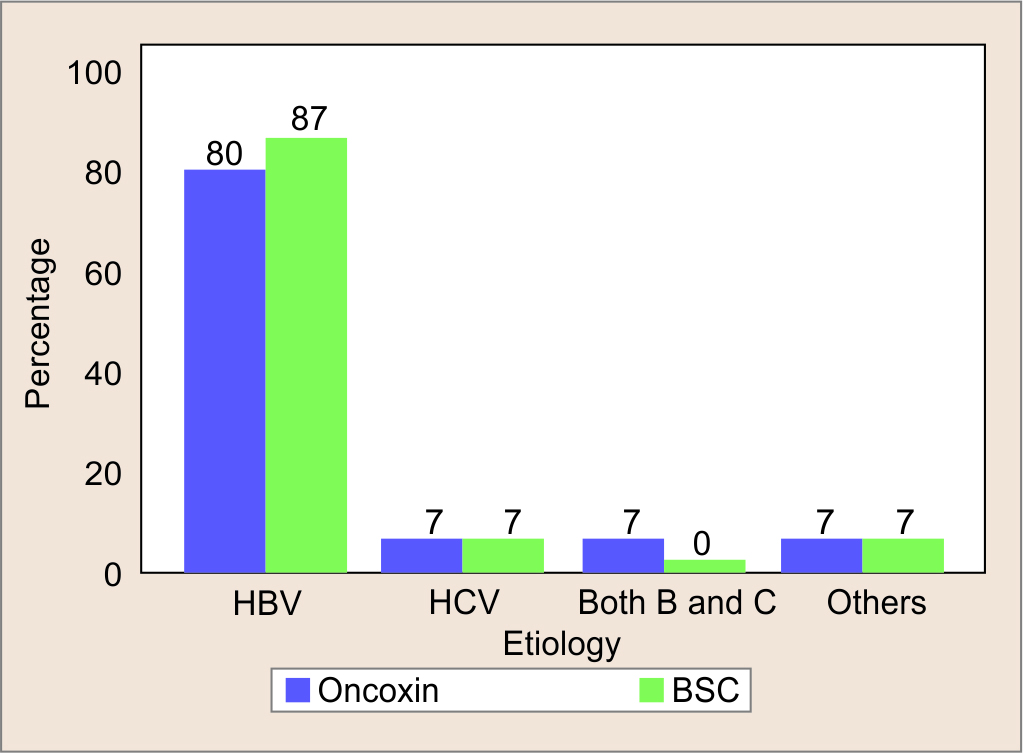 After 30 days of initiation of treatment, the follow up did not show a statistically significant survival benefit in the Oncoxin group. However, after 60 days of initiation of treatment, follow up showed eight (26.7%) patients survived in the Oncoxin group, while one (3.3%) patient survived in the BSC group. This difference was statistically significant 0.03 (p <0.05) (Table 4).

The median survival for all the patients, Oncoxin group, and BSC group was 24, 23, and 24 days, respectively. The Kaplan–Meier curve for the overall survival showed a significant survival difference of 0.03 (p <0.05) between the two groups at 60 days (Fig. 2), but at 30 and 90 days, it revealed no statistically significant difference (p >0.05). 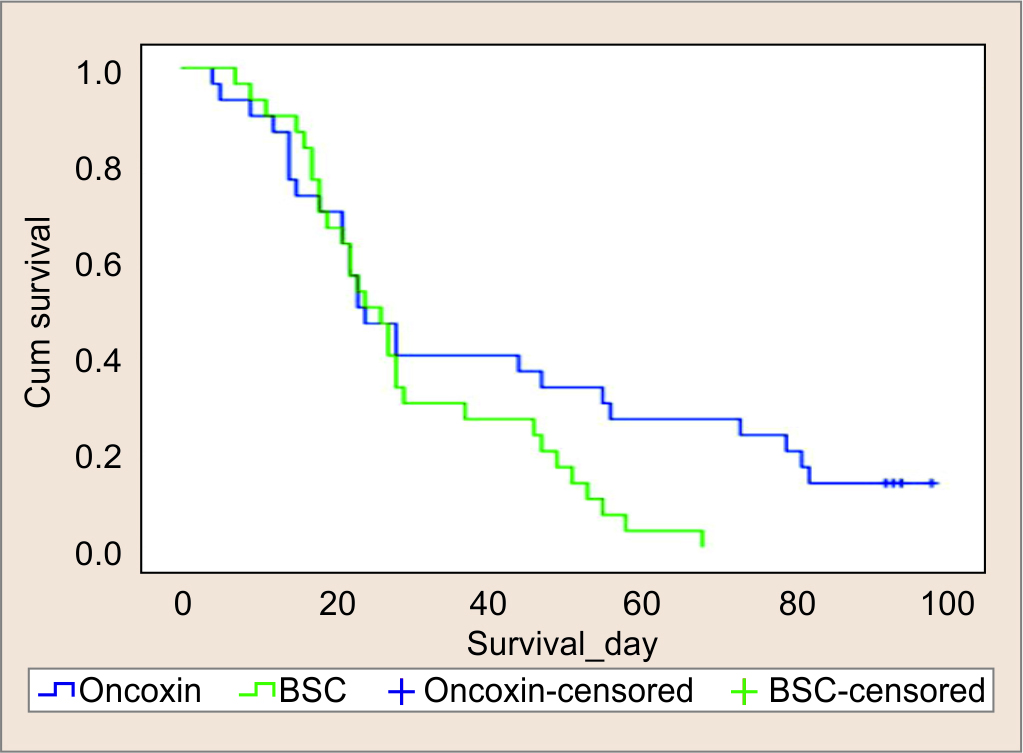 The present study did not observe any adverse effects of Oncoxin. Mahtab et al.6 also reported a similar observation.

The study has shown that Oncoxin appears to increase the survival of some, but not all patients with terminal HCC. Most of the patients receiving only BSC died within 60 days after their entry in this study. Patients receiving Oncoxin on the other hand showed better survival as 8 of 30 (26.7%) patients with terminal HCC survived for more than 60 days and 4 of 30 (13.3%) patients survived for more than 90 days after receiving Oncoxin.

Oncoxin is a food supplement that showed better survival in terminal HCC. More importantly, it was observed that Oncoxin significantly improves the quality of life in terminal-stage HCC patients by improving ECOG Performance Status. So, we can conclude that Oncoxin may be considered as a palliative care medicine in terminal-stage HCC patients. However, this observation needs validation with the further multicenter study.