Reigniting an Old Debate: Does Substance Abuse Exist among Medical Students in a Tertiary Care Center of Kolkata during COVID-19 Pandemic? A Cross-sectional Descriptive Study

Background: Substance abuse and its associated problems are a global concern. Substances, such as tobacco, alcohol, cannabis, and various allopathic drugs have been widely abused by students for various reasons despite their known ill effects.

Aim and objective: Prevalence and pattern of substance abuse among the medical students in a medical college of Kolkata during coronavirus disease (COVID-19) pandemic.

Material and methods: It is a hospital-based, cross-sectional study. This is carried out in ESI-PGIMSR, ESIC Medical College and Hospital, Joka, Kolkata. Data were collected after obtaining due consent from the Institutional Ethics Committee of our institute. Students pursuing MBBS constitute the study population. A structured questionnaire created by Google forms, designed, and validated in-house was circulated online to obtain the information.

Results: Details of the demographic pattern showed 72 of them were female students and the rest were male and their age group varied between 21 and 23 years. Thirty-four of them were staying in the rural area whereas the rest were urban pupils. Most of the participation came from 1st-year students (83) and the least came from final year (4th or 3rd Prof Part 2) students. The number of participants was only 10. A significant statistical association was found between male gender and marijuana abuse (p = 0.043), and male gender with smoking (p = 0.002). The association of the status of being a hostelite with marijuana abuse (p = 0.015), alcohol abuse (p = 0.065), and with smoking (p = 0.012) was also found to be statistically significant.

The prevalence of smoking and marijuana abuse was observed to progressively increase from the 1st year (3.61%) to the final year (smoking = 40%, marijuana = 50%).

Conclusion: Further research is needed from Eastern India to understand patterns of substance use among medical students, to identify important determinants, and reinforce protective factors.

Medical students are becoming the soft target of drug dependence, which is essentially becoming a growing concern for parents, the community, and the medical fraternity. Though medical students are helping patients to overcome substance dependency, they are not immune to these temptations themselves. They have high levels of work-related stress, frequent contact with illness, disrupted sleep, and social life, as well as erosion of taboo against injecting and opiates1,2 and have easy access to psychoactive substances. Moreover, Milkman 1999 explained how the knowledge of pharmacology, medicine, and biochemistry of drugs cause them to be comfortable with the usage of the same. In addition to negative effects on the individual’s physical and mental health, and on their families, substance abuse may threaten the ability to provide adequate learning and patient care. It may undermine the individual’s role as a medical student, future doctor, and a role model for healthy lifestyles.1,2 Substance abuse among medical students may have an impact on the conduct, safety, and efficiency of future doctors. Despite serious, ethical and political, and medico-legal ramifications, there is little research on the subject, especially from India. We have aimed to explore the patterns of substance use among medical students. A brief self-reported questionnaire will be used to identify current and lifetime use of tobacco, alcohol, cannabis, heroin, and nonprescription drugs. This study will be a snapshot of the problem of substance use among medical students from a tertiary Centre of Eastern India.

Substance abuse and its associated problems are a global concern. World Health Organization estimated a burden of worldwide psychoactive substance use of around 2 billion alcohol users, 1.3 billion smokers, and 185 million drug users. Substances, such as tobacco, alcohol, cannabis, and various allopathic drugs have been widely abused by students for various reasons despite their known ill effects.1,2 Studies conducted worldwide including India have estimated a prevalence rate of substance abuse to be around 20–40% among students from various streams, including the medical field.3,4 However, these restrict themselves to tobacco or alcohol use and many of these are gender-biased.5–11 Hence, the present study was undertaken to estimate the prevalence of substance abuse among medical students in a medical college situated in an urban region of Eastern India.

Prevalence and pattern of substance abuse among the medical students in a Medical College of Kolkata during coronavirus disease (COVID-19) pandemic.

It is a hospital-based, observational, cross-sectional study. This is carried out in ESI-PGIMSR, ESIC Medical College and Hospital, Joka, Kolkata. Data were collected over a period of 1 month from April 20, 2021, to May 20, 2021, after obtaining due consent from the Institutional Ethics Committee of our institute. Students pursuing MBBS constitute the study population. Doctors, faculty members, interns, and other health care staff were excluded from the study, as they were busy tackling the situation of the COVID-19 pandemic.

A structured questionnaire created by Google forms, designed, and validated in-house was circulated online to obtain the information. Briefly, the themes under which the questions were asked included demographic details, details of the substance abuse (name, duration, frequency, amount), its source, any attempts to quit in the past, ill-effects, and legal consequences of substance abuse, other associated factors, and the impact on academics. The content validity of the questionnaire was checked by experts of qualitative research. Descriptive analysis was used for analyzing various categorical variables. Chi-square test and logical regression analysis were used to analyze the association of various categories and overcome the bias of multiple variables.

Data were entered and analyzed by using Microsoft Excel 2013 and statistical analysis was carried out by R version 3.5.1 and R studio version 1.0.136 (R foundation) statistical software (language), p <0.05 implied statistical significance. One hundred fifty students were recruited with 5% precision and alpha error and an estimated prevalence of 20% and a confidence interval of 95%.

This study was carried out in a tertiary care hospital and medical college (ESI, Joka). One hundred fifty students had participated in this cross-sectional study. Details of the demographic pattern showed 72 of them were female students and the rest were male and their age group varied between 21 and 23 years (Table 1). Thirty-four of them were staying in the rural area whereas the rest were urban pupils. Most of the participation came from 1st-year students (83) and the least came from final year (4th or 3rd Prof Part 2) students. The number of participants was only 10. Most of them (85) stayed at home due to COVID-19 and the rest were trapped in the hostel. Most of them were using mobile phones. The income of their parents varies from less than 2.5 lakhs to more than 10 lakhs. More than 16 study participants reportedly had alcoholic drinks for 1–2 days in the observed month, only one participant had for 3–5 days and 2 had alcoholic drinks for 10–19 days and 2 had the same for 20–31 days (Table 2, Fig. 1). 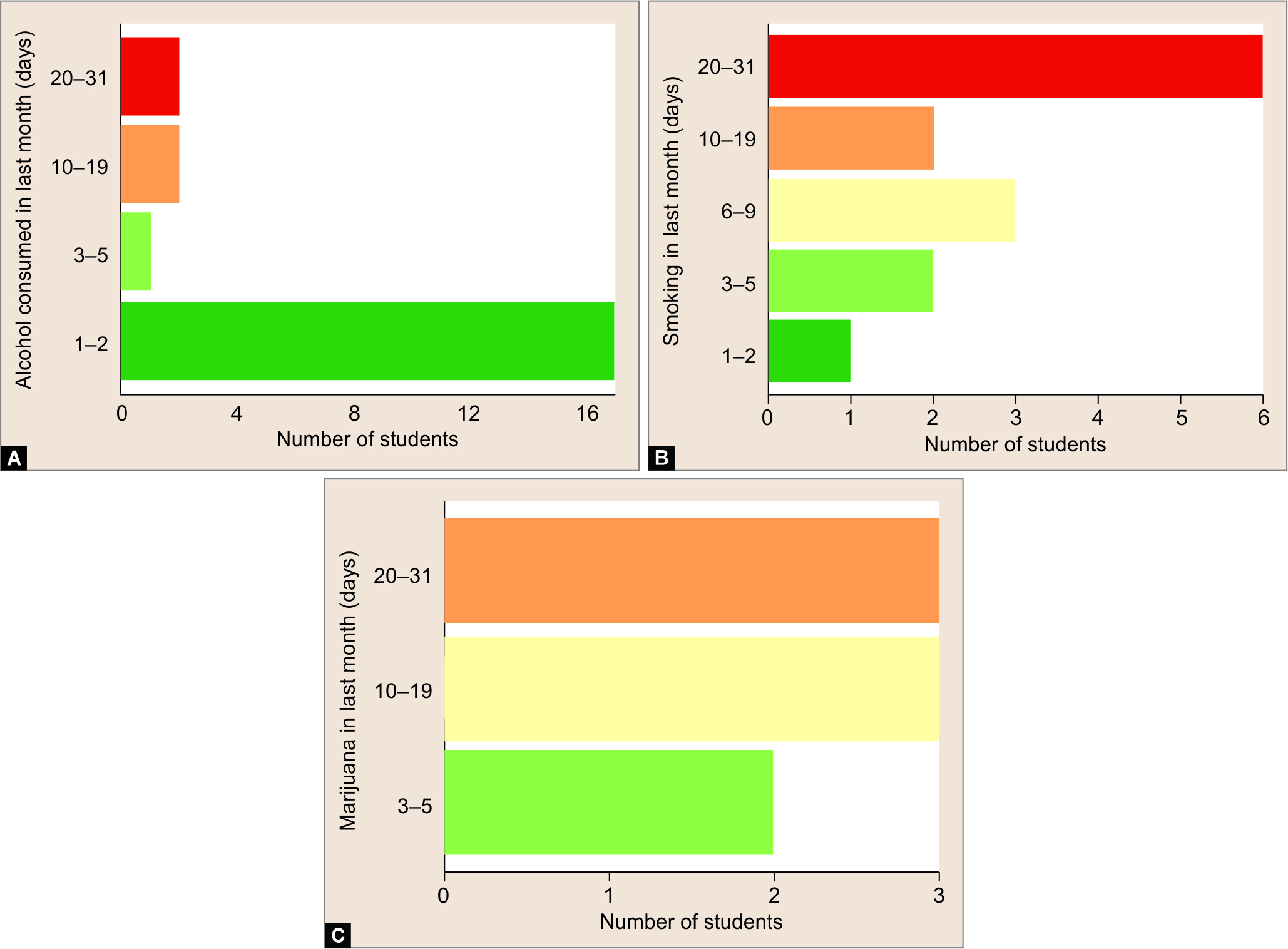 Figs 1A to C: Frequency of smoking, alcohol, and marijuana use in the previous month

Around 12.5% of study participants were unsure if they would continue to use the substances in question in the future, but only 33.3% of the students said that study they would not use these substances (Fig. 2). 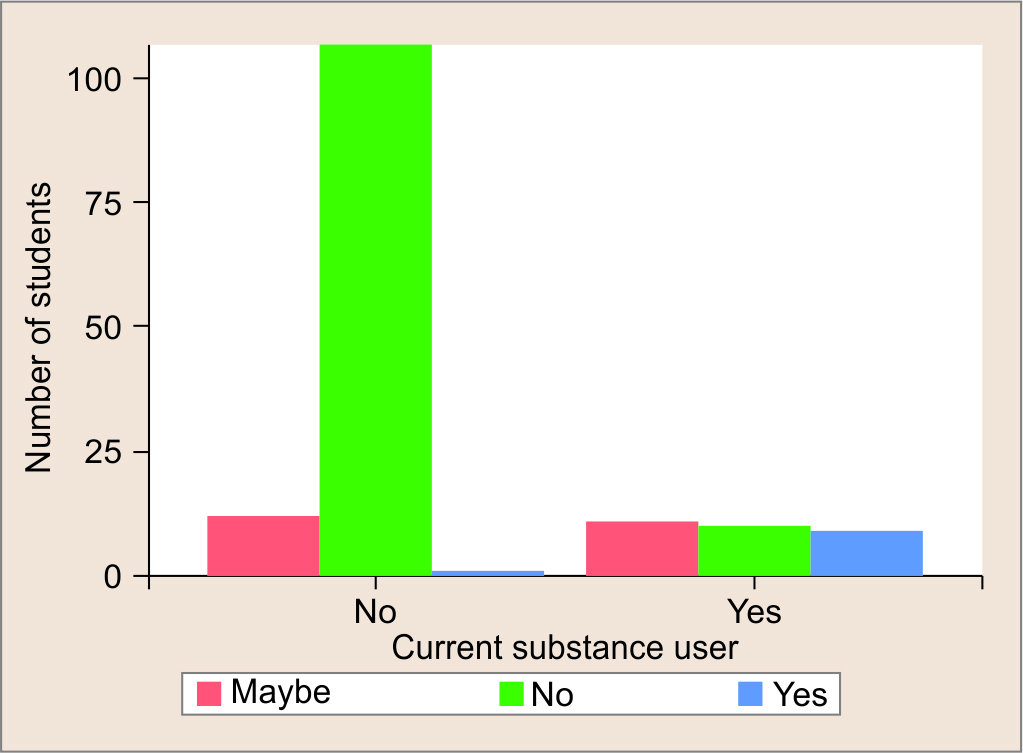 Fig. 2: Number of students who are willing to try substance in future

The prevalence of smoking and marijuana abuse was observed to progressively increase from 1st-year (3.61%) to final year (smoking = 40%, marijuana = 50%). Ten students from the final year might not be a true reflection of prevalence.

The majority of our population related to substance abuse were male students.

Substance abuse refers to the unpredictable use of psychoactive substances including alcohol, tobacco, and forbidden drugs. This has been stated that with the use of illegal substances, a person may reach a highly enjoyable state. There have been delinquent incidents described under the impact of substances, also this may lead to long-term change in the character. Substance abuse has a deleterious impact on the family, because of a person’s unrestrained wish to take different substances. There will be a psychological, sociocultural, and economic impact on the family. In the current study, we have included 150 undergraduate Medical Students and the study was conducted in ESI-PGIMSR, JOKA, and Medical College. Out of the 150 undergraduate students, 72 are females and 78 are males. This is most likely because of the male preponderance in our medical college. The majority of our study population resides at home due to the COVID-19 pandemic, which is different in comparison to a study where hostelites were predominant participants. This simulates a study done by Arora et al.12 In a study carried out by Sonawane et al. substance abuse has become a common problem in medical students. In our study, the most affected age group is 21–23 years. In a study by Jagnany in the year 2008, more prevalent substance abuse was seen in males than in females simulating our study.13 Sonawane et al. stated otherwise. The majority of participants in her study believed that both the male and female gender has an equal tendency to lean towards substance abuse. The primary reason for inclining towards substance abuse as stated by her study participants was peer pressure, which is simulating with study by Arora et al.12 The other reasons listed in both the studies were the influence of seniors, academic stress, depression, curiosity, staying alone, relationships, poor self-esteem, and recreation. Unfortunately, in our questionnaire, we have not taken these data as the project was carried out by a 2nd-year student as a part of the Indian Council of Medical Research Short Term Studentship activity. The most common substance abuse by medical students is alcohol, tobacco, and cannabis. Similar findings were seen in the study by Ayala et al.14 We all know about the consequences of substance abuse; when we questioned the study participants regarding the same, the majority expressed their views placed in this article in a graphical form. A study on the same topic by Arora et al. showed that the majority of the students have not exposed themselves to the conjectures of drug abuse, which corresponds to our study as well as Sonawane et al. showed in her article that 26.67% of study participants have exposed themselves to these substances.12 Sonawane et al. said that lack of curiosity and the fear of addiction was the major reason. The other opted for various other methods like taking them to a counselor, ignoring the situation, reporting to a higher authority, and psychotherapy.13

Limitation of the Study

The limitation of the study was not only restricted by the fact that medical college students were included without any control but lesser sample size due to the COVID-19 pandemic situation as well as missing a few vital points in the questionnaire made our job difficult. Leading questions were unavoidable as the study was done via an online Google form.

The study findings suggest that abuse of substances is an issue among students in the medical profession having grievous consequences in different domains. This is a major public health concern. But fortunately, many of our students have not exposed themselves to the tsunami of substance abuse. Further research is needed from Eastern India to understand patterns of substance use among medical students and to identify important determinants, and reinforce protective factors. This even can be compared with the prevalence of drug abuse in other professions.

Taken from the institutional ethics committee.

3. The global burden of substance abuse. Available from: http://www.who.int/substance_abuse/facts/global_burden/en/ [Accessed on January 11, 2014].