The combination of one-and-a-half syndrome and facial nerve palsy is a rare neurological syndrome called eight-and-a-half syndrome, described first by Eggenberger in 1998. The one-and-a-half syndrome is characterized by ipsilateral conjugate horizontal gaze palsy (the “one”) and an ipsilateral internuclear ophthalmoplegia (the “one-half”). A single unilateral lesion involving the paramedian pontine reticular formation or the abducens nucleus (causing the conjugate gaze palsy) with the interruption of internuclear fibers of the ipsilateral medial longitudinal fasciculus along with the region of facial colliculus results in eight-and-a-half syndrome. The occlusion of perforating artery to the pons resulting in pontine infarction is the commonest cause of this syndrome. The rare causes include demyelination, tumor, infection, and brainstem vasculitis. We describe here a case of eight-and-a half syndrome in a 50-year old gentleman due to pontine infarct, who also had cerebrovascular disease risk factors.

Eight-and-a-half syndrome is a rare syndrome comprising of one-and-half syndrome with peripheral seventh nerve palsy. It is most often caused by a vascular etiology. It was first described in detail by Eggenberger1,2 in patients with the vertebro basilar disease as etiology in 1998. So far, 27 cases have been published. It is also described in multiple sclerosis by Skaat and Huna-Baron3 and Mortzos et al.,4 rarely by space-occupying lesions, such as tuberculomas published by Vantoorn et al.5 Vascular etiology is the most common etiology in old age, whereas tumor, demyelination, and viral infections were found to be the common etiology in children.6

A 50-year old male, right-handed, nonsmoker, and nonalcoholic, known case of systemic hypertension since 5 years and ischemic heart disease since 2 years on regular medications presented with a sudden onset of giddiness followed by double vision on seeing more to his right side with slurring of speech and angle of the mouth deviation to the right, with no history suggestive of weakness, sensory disturbances, clumsiness, unsteadiness, headache, neck pain, previous cerebrovascular accidents, or tuberculosis. On examination, he had right eye exotropia, on looking to the left, there was left horizontal gaze palsy with absent left gaze saccades, on looking to the right, there was nystagmus in the right eye and the only movement intact was right eye abduction. Normal vertical gaze and saccades, with no impairment of vestibuloocular reflex. He also had left lower motor neuron facial palsy with bell’s phenomenon. There was no ptosis, anisocoria other cranial nerve involvement, pyramidal, sensory, cerebellar, or meningeal involvement. MRI brain showed acute infarct with diffusion restriction in the caudal left parapontine region, ventral to the fourth ventricle. MRA was normal. Four-vessel Doppler revealed a mild increase in intimal thickness in both the vertebral arteries. An echocardiogram showed a normal left ventricular function. The patient was initiated on dual antiplatelets and high-dose statins. There was a mild improvement of adduction in the left eye, later discharged with medications and on regular follow-up (Figs 1 to 3).

Figs 1A and B: (A) Left LMN facial palsy; (B) Left Bell’s phenomenon 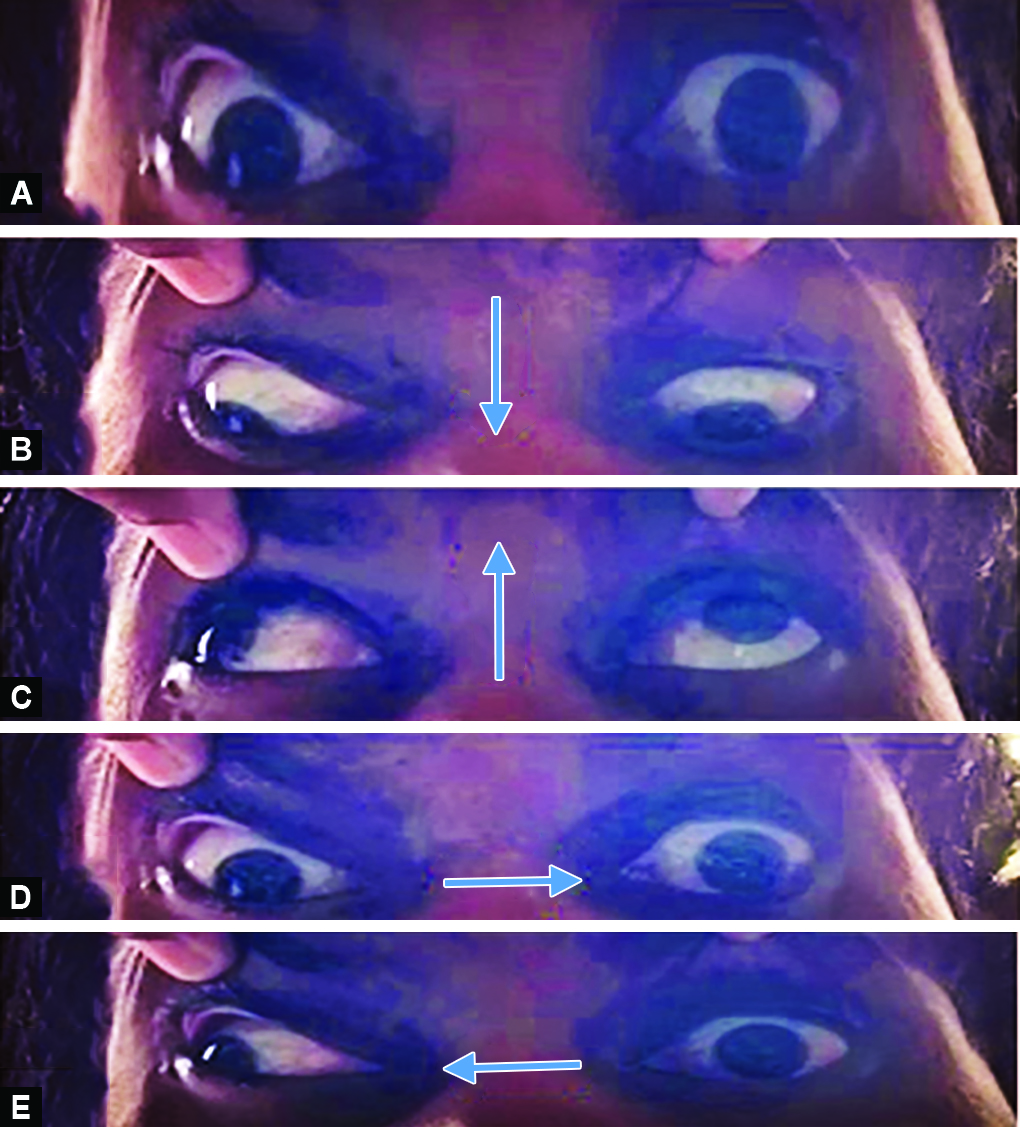 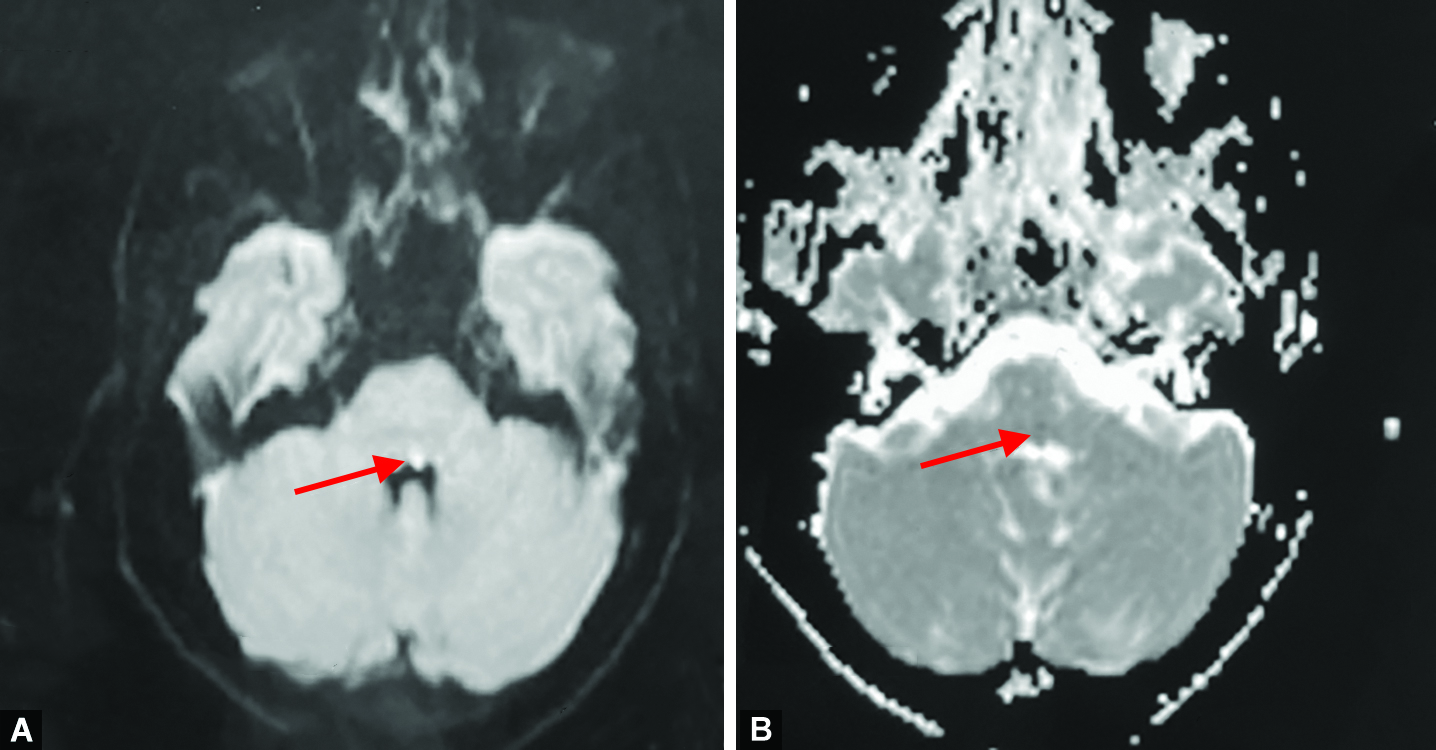 Figs 3A and B: MRI brain with (A) Diffusion restriction at left para pontine region ventral to fourth ventricle with; (B) Corresponding low ADC

Eight-and-a-half syndrome is a combination of either ipsilateral seventh, sixth, and medial longitudinal fasciculus or ipsilateral seventh, ipsilateral parapontine reticular formation, and ipsilateral medial longitudinal fasciculus.7 This results in complete ipsilateral horizontal gaze palsy and contralateral partial gaze palsy with the seventh nerve palsy. Herring’s law of equal innervation is the reason for contralateral eye abducting nystagmus.8 So far, 27 cases have been published, among those 18 were due to vascular, 4 were due to autoimmune, 3 were due to hemorrhagic stroke, and 1 was due to giant cell arteritis and pontine tuberculoma.9,10 Rarely, trigeminal neuralgia with eight-and-a-half syndrome has been described.11 Commonly, facial palsy improves first followed by ocular symptoms.10 In vascular etiology, recovery is incomplete.10 The most common variant of one-and-a-half syndrome is eight-and-a-half syndrome. The occlusion of paramedian perforating artery to the pons results in lower pontine tegmentum infarction.11,12 In the cases described first by Eggenberger, lesions were not identified in MRI brain images. But later, Nandhagopal and Krishnamoorthy13 noted the MRI brain lesions at the lower pontine tegmentum, the presumed site of involvement by Eggenberger. The rare causes include demyelination, tumor, infection, and brainstem vasculitis. Mesina et al.14 described this syndrome in a 56-year old male who had pontine cavernoma.

This case report serves to emphasize the need for a high index of suspicion to diagnose this rare treatable neuro ophthalmologic syndrome.