Spinal tuberculosis is the most common form of skeletal tuberculosis, and it can be destructive and devastating to the patient. Most of the spinal tuberculosis cases involve thoracic spine, and cervical involvement is unusual and rare. This case series is about different presentation and treatment approaches of cervical spine tuberculosis in four healthy young girls without any comorbidities. Among them, three girls presented with severe neurological complications. All of them had a history of severe neck pain and stiffness. None had constitutional symptoms or tuberculosis exposure. Diagnosis was made with the help of magnetic resonance imaging (MRI) spine and histopathological and microscopy of biopsied skeletal segments. The three girls with neurological complications were treated with surgical debridement and cervical spine stabilization surgery along with antitubercular treatment (ATT). All the three girls remarkably improved neurologically with a combined approach. The one without significant neurological deficits was started on ATT alone and advised to follow up with serial neuroimaging.

A 14-year-old girl presented with polyarthralgia involving large joints of upper limbs, neck pain, and difficulty in walking for one month. She was apparently alright 3 months ago after which she started to have fleeting type of large joint pains of upper limbs, initially left elbow followed by right elbow, wrist, and left shoulder. Small joints were spared and there was no early morning stiffness or redness or swelling of joints. Later, she developed neck pain, radiating to the right hand, aggravated with a movement of head and shoulder and relieved by taking rest. She also had difficulty in walking because of stiff type of proximal weakness of both lower limbs and occasional tripping. General physical examination revealed gibbus at cervical level with anterocollis and increased height of neck ratio. However, she had no spinal tenderness or signs of inflammatory arthritis. Her hemodynamic parameters were within normal limits. On examination of the nervous system, she had spastic quadriparesis in the Medical Research Council (MRC) grade of 4/5 in all 4 limbs with exaggerated deep tendon reflexes and bilateral extensor plantar. No abnormalities could be elicited during higher function, cranial nerves, sensory, cerebellar, or extrapyramidal systems.

Basic hematological and biochemical tests including liver function and renal function tests were within normal limits. Antinuclear antibody (ANA) and extractable nuclear antigen (ENA) profiles were negative. Magnetic resonance imaging (MRI) of cervical spine showed disk destruction of C6–C7, posterior subluxation of C6 vertebral body over C7, and pre- and paravertebral collection from C6 to D2 (Fig. 1A). All the above features were suggestive of spondylodiscitis with paravertebral collection. Computed tomography (CT) of thorax showed mediastinal and hilar lymphadenopathy. Antitubercular treatment (ATT) was started. Neurosurgeons advised for surgery. C7 corpectomy with H plate cage fixation was performed along with drainage of the paravertebral collection (Fig. 1B). The patient was mobilized 1 week after surgery, and at the time of discharge, the patient power improved to MRC grade 5/5 in all 4 limbs. She was advised to continue ATT for 9 months and is under periodic follow-up.

Figs 1A and B: Magnetic resonance imaging of cervical spine showed disk destruction of C6–C7, posterior subluxation of C6 vertebral body over C7, and pre- and paravertebral collection from C6 to D2; 1b showing C7 corpectomy with H plate cage fixation

A 15-year-old girl presented with a 4 month history of mechanical neck pain radiating to both arms, followed by neck stiffness and difficulty in gripping objects. She also had difficulty in lifting the arms above the head. She could not get up from squatting position and could not hold slippers tightly. There were no symptoms suggestive of bowel and bladder dysfunction. Constitutional symptoms or contact history with tuberculosis-affected person was absent. General physical examination was unremarkable except for the gibbus in neck. Her vital signs were stable. On examination, Lhermitte’s sign was elicited. There was a pyramidal pattern of weakness of all four limbs in MRC grade 4/5 associated with other upper motor neuron (UMN) signs including spasticity and bilateral plantar extensor. Other systems of examination were unremarkable. Routine blood investigations were normal. MRI cervical spine showed C4–C6 vertebral body involvement with pre- and paravertebral collection from C2 to T1, with C3–C4, C4–C5 cord compression (Fig. 2). Anterior corpectomy was done for the patient and pus was drained. Histopathological examination showed granulomas, giant cells, epithelioid histiocytes, and areas of caseous necrosis suggestive of tuberculosis of the cervical spine. She was started on ATT and postsurgery her limb weakness significantly improved. 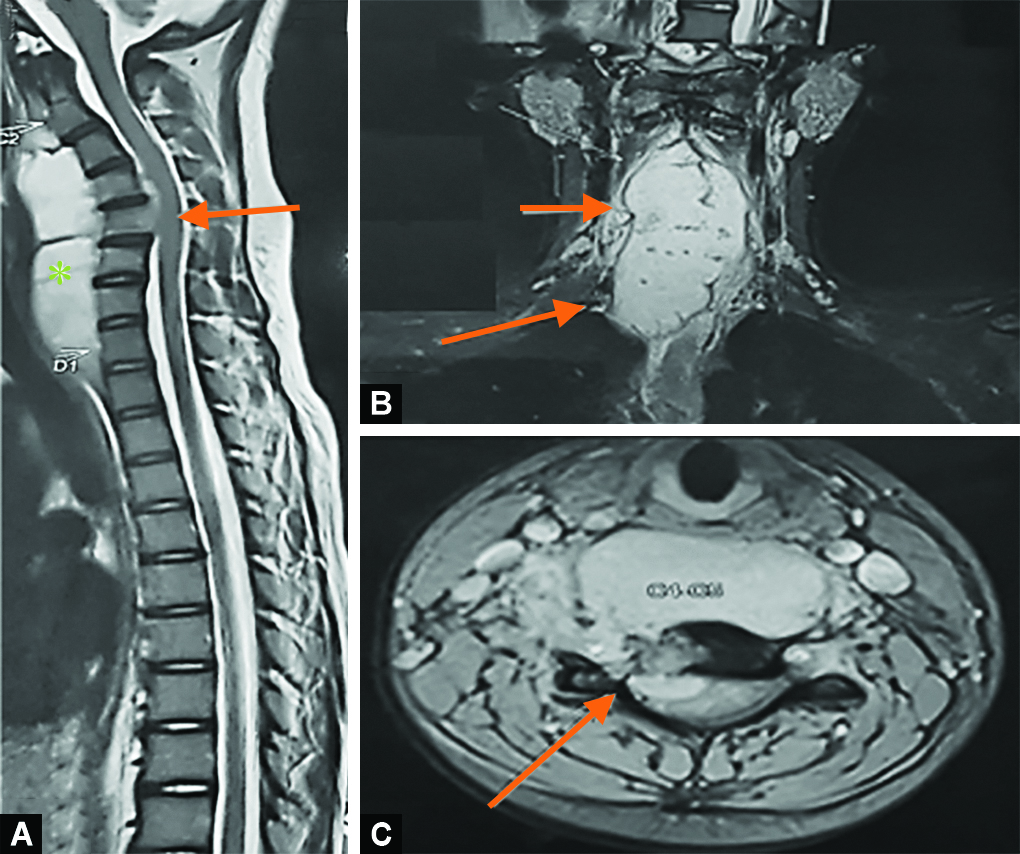 A 12-year-old girl presented with 3 months of neck pain followed by weakness of all 4 limbs (lower limbs weaker than upper limbs) for a duration of 15 days. She could not walk for a week, without involvement of bowel or bladder. The patient denied any history of fever, weight loss, or trauma. She had no past history of tuberculosis exposure. She was afebrile and her general physical examination was unremarkable. Her neck was held in left lateral flexion position with mild kyphosis. On examination, her upper limbs’ power was 4/5, whereas her lower limbs were spastic with the power of 3/5 and exaggerated lower limb deep tendon reflexes. 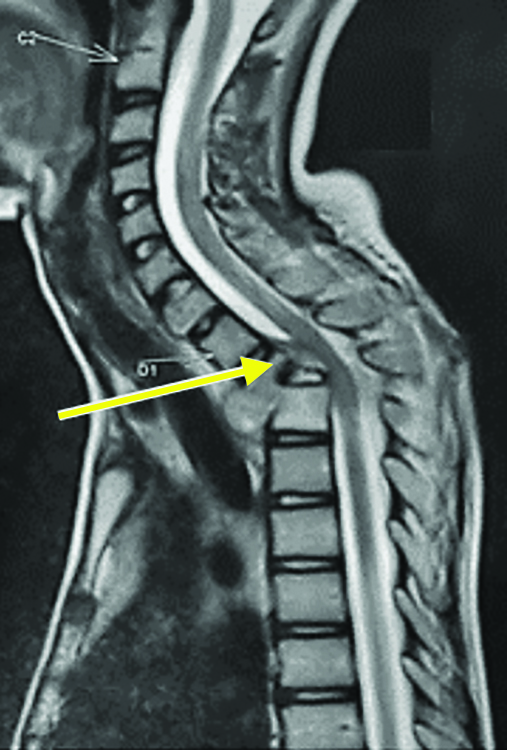 A 12-year-old girl presented with complaints of severe neck pain for 15 days which was radiating to the right shoulder and not relieved despite analgesic intake. Her neck was stiff and she had neither history suggestive of sensorimotor deficits nor autonomic dysfunction. She had no history of fever or weight loss. Her general physical examination was unremarkable. On examination, there is a limitation of neck movements, with normal tone, power, and reflexes. She had no sensory or cerebellar involvement. Cervical spine X-ray was normal and started on analgesics but no improvement in patient symptoms. MRI spine showed features suggestive of Pott’s spine including prevertebral collection from C2 to D1 and spread along posterior longitudinal ligament from C5 to D2 without any significant cord compression (Fig. 4). She was started on four-drug regimen ATT and asked to follow up with serial neuroimaging. 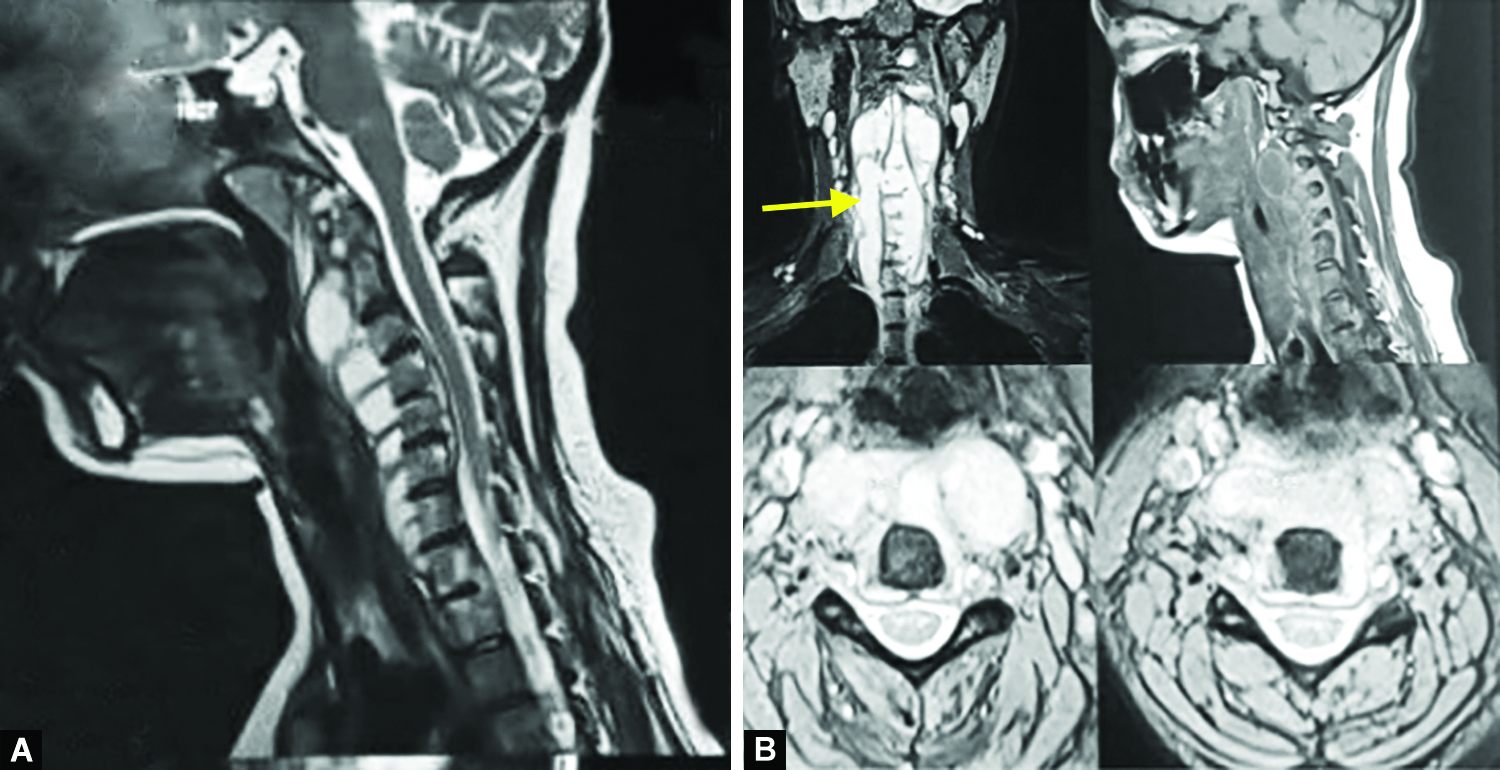 Figs 4A and B: MRI spine showed features suggestive of Pott’s spine including prevertebral collection from C2 to D1 (arrow) and spread along posterior longitudinal ligament from C5 to D2 without any significant cord compressions

The clinical features of spinal tuberculosis are extremely variable, because of insidious nature and diagnostic period may vary from weeks to years. Usual clinical manifestations depend on the site of involvement of the disease.2 When the cervical spine is involved, the usual presenting complaint is neck pain as it can precede the diagnosis by 2 years. The serious neurological complication of cervical Pott’s disease is quadriparesis. Often, the spinal tuberculosis lesions are accompanied by pre- or paravertebral abscess known as cold abscess. In the absence of fever, it is very suggestive of tuberculosis.3

Prognosis is usually good in patients without neurological sequelae, and for those with spinal instability and neurological complications, early surgical intervention results in good recovery.

Cervical Pott’s disease is a rare site of skeletal tuberculosis. The diagnosis could be delayed due to variable clinical presentations. The conservative management of cervical spine tuberculosis includes antitubercular chemotherapy and immobilization. Surgery is reserved in the case of spinal instability or neurological aggravation.