Immune thrombocytopenic purpura (ITP) is a common bleeding disorder, and it may be primary (no potential etiologies found) or secondary (underlying associated conditions). The association between ITP and Hodgkin disease (HD) is well recognized in literature. ITP may occur before, during concurrent, and after the diagnosis of HD. Here we report a case of 15-year-old young boy, diagnosed as having ITP, who presented with persistent fever for a period of around 6 months and pancytopenia, and subsequently, we diagnosed HD. He responded well after chemotherapy.

Immune thrombocytopenic purpura (ITP) is an acquired bleeding disorder, caused by autoantibodies against platelet antigens. As per a review of published literature, annual ITP incidence is approximately 1–6 per 100,000 adults in the era of complete hemogram.1,2 Majority of individuals with ITP will be asymptomatic at the time of diagnosis, while around two-third of patients may present with bleeding symptoms. Hodgkin’s disease (HD) may present with rare associated features, like pruritus, alcohol-induced pain, hemolytic anemia, lytic bone lesions, and ITP, among many others.3 These presentations pose diagnostic dilemma to the treating physicians and can be considered as paraneoplastic manifestations, for which complete diagnostic evaluation of an underlying malignancy is to be sought.

A 15-year-old adolescent boy without any past medical history was diagnosed with ITP 6 months back before presentation during evaluation of his hemorrhagic skin lesions over the right shin. He was found to have thrombocytopenic with platelet of 40,000 per cmm (reference range: 1.5–4.5 lac/cmm) and increased megakaryocytes count on bone marrow examination. He was treated with steroid and intravenous immunoglobulin (IVIg), resulting in a rapid platelet response; subsequently, he had cyclical moderate- to high-grade fever for 6–8 days with afebrile intervening period of 4–7 days. Fever was not associated with any chill, rigor or sweating, and any other localizing symptoms. In this period, he lost about 4 kg weight (baseline weight—55 kg).

On examination, he had pallor, few purpuric spots over bilateral legs, and mild hepatosplenomegaly without any bony tenderness or peripheral lymphadenopathy.

On investigation, pancytopenia was found on complete hemogram with high inflammatory markers (ESR 95 mm in 1st hour CRP—110 mg/dL), LDH (450 IU/L), and ferritin (1200 µg/L). Abdominal ultrasonography showed spleen was 16 cm and liver was 17 cm with normal echotexture. He also had high serum triglyceride (265 mg/dL), and his blood and urine were sterile. Bone marrow was reactive without any evidence of hemophagocytic or malignant cells. Taking into account his clinical presentation of intermittent pattern of fever, pancytopenia, and mild hepatosplenomegaly without any palpable lymphadenopathy, we thought of an autoimmune disease or a hematological malignancy. He had negative antinuclear antibodies, normal C3, C4 level, RA factor, and anti-CCP. Computed tomography (CT) scan of abdomen and thorax revealed multiple retroperitoneal, bilateral iliac, and mediastinal lymphadenopathy. On whole-body F-fluorodeoxyglucose positron emission tomography/computed tomography (FDG PET-CT) (Fig. 1A), there was metabolically active multiple lymphadenopathies in both sides of diaphragm—bilateral cervical (Dmax—1.18 cm, SUVmax—11.42), right axillary (Dmax—1.74 cm, SUVmax—19.97), mediastinal (Dmax—2.79 cm, SUVmax—20.61), abdominopelvic region (right external iliac lymph nodes showing increased FDG uptake, Dmax—2.91 cm, SUVmax—35.53), diffuse active huge splenomegaly (SUVmax—17.68), and no evidence of bone marrow involvement. To extend the investigation to reach the final diagnosis, we did CT-guided biopsy from right external iliac lymph nodes and excision biopsy from subcentric increased-FDG-uptake right cervical lymph node, but all of these revealed reactivity on histopathological examination. In the meantime, the patient developed severe pancytopenia with frequent cyclical high-grade fever, so to establish the suspicion of lymphoproliferative disease, the patient was sent for total splenectomy (Fig. 2). Histopathological examination of the splenic specimen revealed classical Hodgkin’s lymphoma (Fig. 3) was found to be positive with CD30, CD15, and Pax5, and negative for CD20, CD45 on immunohistochemistry. According to Ann Arbor staging, the patient was presented as Stage IIIA, and after that, he was put on doxorubicin hydrochloride (Adriamycin), bleomycin sulfate, vinblastine sulfate, and dacarbazine (ABVD regimen) for six cycles. After completion of three cycles of chemotherapy, restaging whole-body PET-CT scan showed complete remission (Fig. 1B). 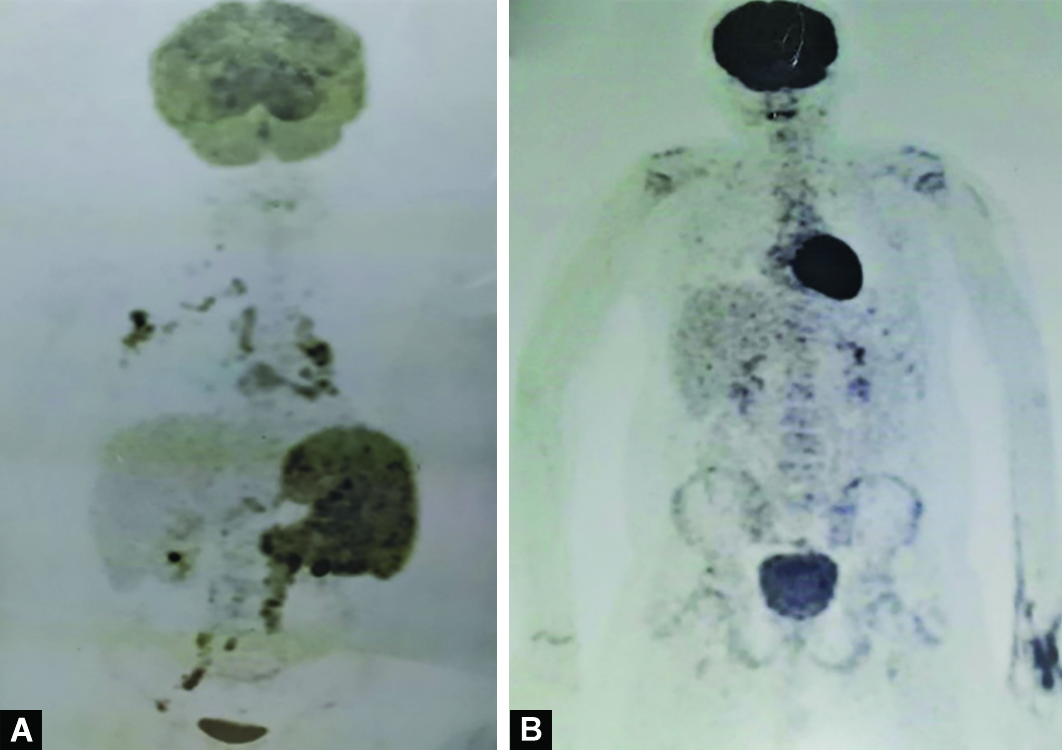 Figs 1A and B: (A) PET-CT scan showing increased FDG uptake of retroperitoneal and right axillary and bilateral cervical lymph nodes and diffuse uptake of huge splenomegaly; (B) Complete response in restaging PET-CT scan 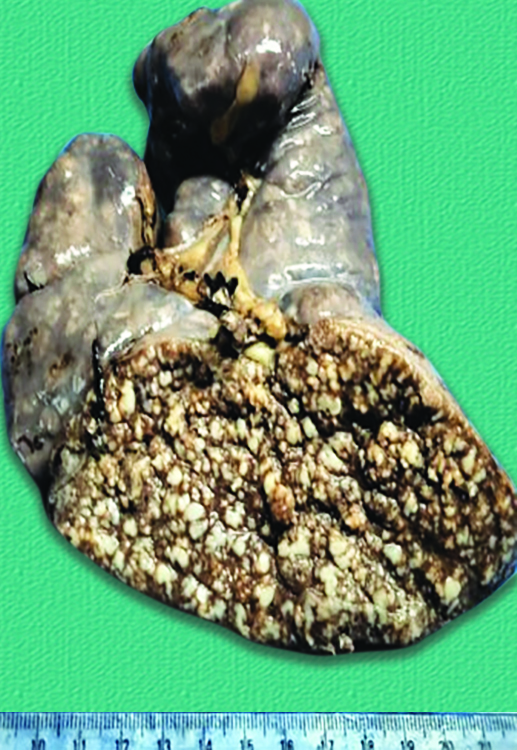 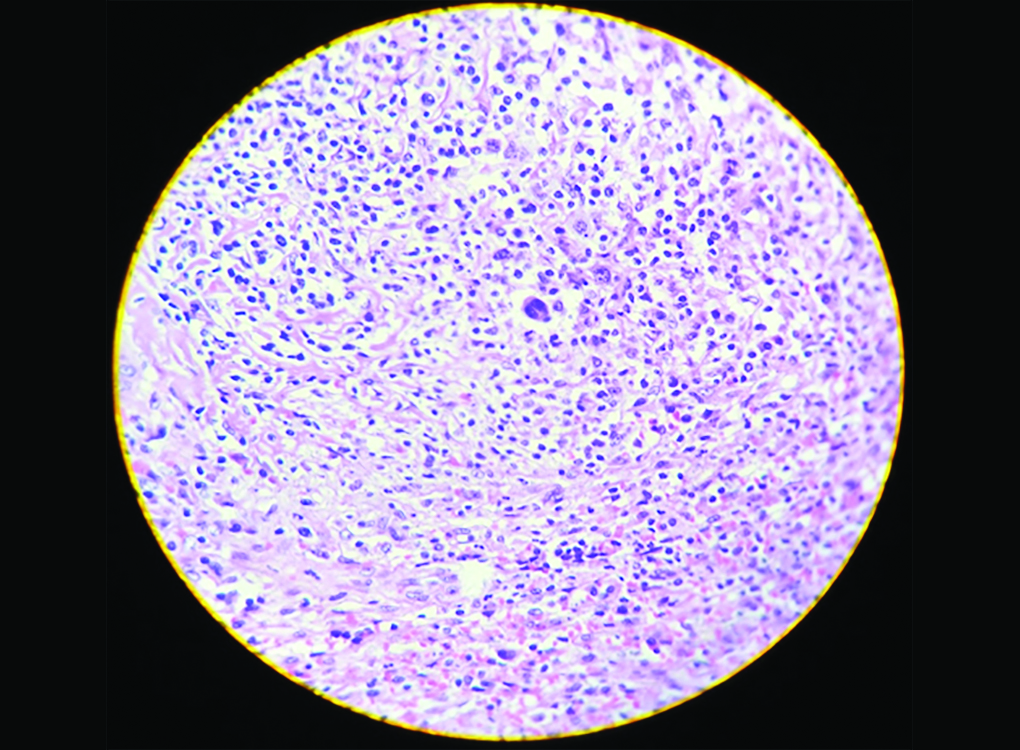 The presence of ITP as initial manifestation of HD is a rare entity with an estimated prevalence of 0.2–1% according to some studies.4 It can be explained as a paraneoplastic disorder; however, this is still a debatable topic in medical literature. One large case-controlled study did reveal a statistically significant incidence of ITP in patients with HD and concluded that a personal history of certain autoimmune diseases, including ITP, is strongly associated with the risk of developing HD.5

In this case, the patient’s ITP was discovered before the diagnosis of underlying HD, and it was responsive to initial steroid and IVIg treatment. Persistent Pel-Ebstein pattern of fever, and subsequently development of pancytopenia, presence of hepatosplenomegaly, and high inflammatory markers in a background history of ITP aroused the suspicion of underlying hematological malignancy. It was finally diagnosed as HD after histopathological examination of splenic sample following splenectomy. After proper treatment with ABVD regimen for underlying malignancy of HD, patient improved symptomatically and had gradually normalizing complete hemogram. Given this fact, the authors concluded that ITP was likely an autoimmune paraneoplastic syndrome of the patient’s HD. Several other case reports have arrived at similar conclusions.6,7 The lesson learnt from this case is that subsequent involvement of other cell lines in a patient with ITP should arouse suspicion about an underlying condition.

Written informed consent was obtained from the patient for publication of this case report and accompanying images.