New Kid on the Block: Semaglutide

Diabetes mellitus is a major public health problem, and its prevalence is increasing in leaps and bounds not only globally but in India as well. India ranks among the top two countries worldwide for both current and potential future prevalence of diabetes. Presently, India ranks second highest in number of people living with diabetes mellitus—approximately 77 million.1 In patients of T2DM, prolonged hyperglycemia may lead to a swarm of complications—microvascular and macrovascular complications. To reduce the onset and severity of these complications, proper adequate and timely management of hyperglycemia is of utmost importance.

In patients uncontrolled on lifestyle modifications like healthy diet and regular physical exercise and metformin monotherapy, the 2022 American Diabetes Association Guideline recommends glucagon-like peptide-1 receptor agonist (GLP-1RA) as a therapeutic option, when in addition to early and optimum glycemic control, associated CV disease (CVD), chronic kidney disease (CKD), and obesity are associated comorbidities and need attention too.2 GLP-1RAs act by activating GLP-1 receptors present in the pancreas leading to increased release of insulin and decreased release of glucagon—both of these modes of action are glucose-dependent, thereby simulating the action of native GLP-1. Presently, the GLP-1RAs that are available are exenatide, lixisenatide, liraglutide, and dulaglutide all of which are administered by subcutaneous route either daily or weekly. However, despite the glycemic and extraglycemic benefits, parenteral route remains a limitation for initiation of this therapy among T2DM patients. With the availability of oral semaglutide, there remains a huge potential of adopting this group of agents among patients, thereby providing wide range of therapeutic options.

Semaglutide was initially available as a long-acting GLP-1RA that could be administered by subcutaneous (sc) route once weekly to improve patient convenience in contrast to other available GLP-1 analogues which are administered subcutaneously once daily. It has 94% homology with human GLP-1 with three key modifications structurally—namely, the substitution of Ala with Alb at position 8 that increases enzymatic (DPP4) stability, attachment of a linker, and C18 di-acid chain at position 26 that provides strong binding to albumin and substitution of Lys with Arg at position 34 that prevents C18 fatty acid binding at the wrong site3 (Fig. 1). Despite this, due to enormous negative perception of injectable therapy and increased prevalence of trypanophobic population, once weekly injection too failed to gain acceptance amongst patients of Type 2 DM. 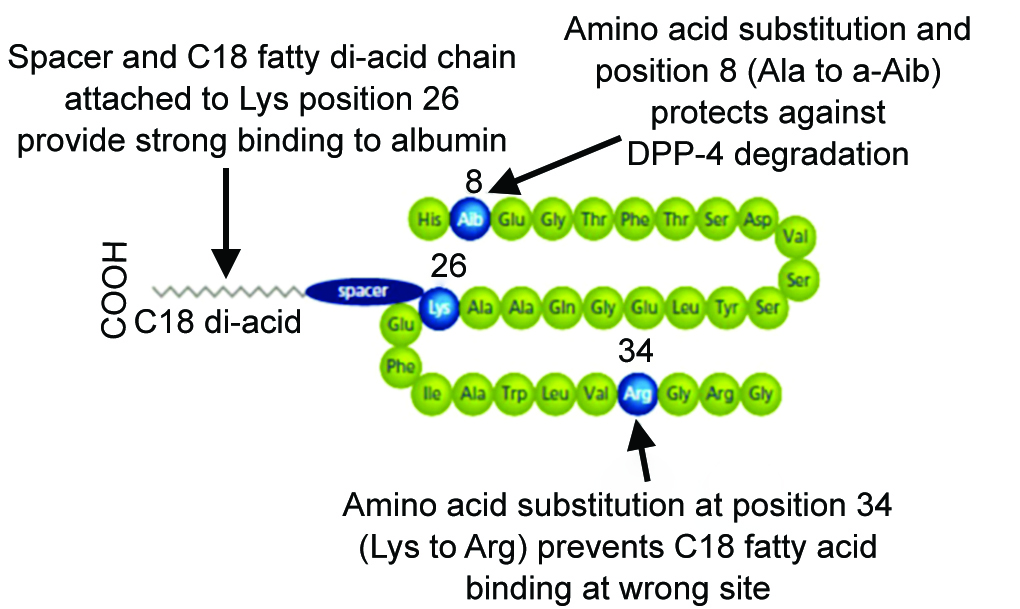 Hence, oral preparation of GLP-1RA remained the need of the hour to improve patient’s convenience and expand noninvasive therapeutic options. However, oral protein-based absorption of the drug is limited due to its rapid degradation in the stomach due to extremely acidic pH, increased activity of proteolytic enzymes, and low permeability across the GI epithelium.4 Orally administered GLP-1RAs have extremely low bioavailability (<0.01%), and to minimize its degradation, integrated technologies need to be implemented to overcome the challenge of oral peptide delivery into the bloodstream. Coformulation of GLP-1RA with an absorption enhancer is needed to increase bioavailability after oral administration. Semaglutide is coformulated into an oral pill with an absorption enhancer, sodium N-(8-[2-hydroxybenzoyl] amino) caprylate (SNAC), also known as salcaprozate sodium, a small fatty acid derivative which promotes absorption of semaglutide across gastric epithelium (Fig. 2).5 SNAC is metabolized by B oxidation and glucuronidation and eliminated primarily through urine. However, the coformulation does not change the chemical structure of either semaglutide or SNAC; they remain as distinct entities. These enhancers open the tight junctions and allow paracellular transport, which protects the peptide from enzymatic degradation by exerting a buffering action in the stomach. Once SNAC enters into the gastric mucosa, it fluidizes the lipid membrane, thus augmenting the transport of semaglutide into systemic circulation. When semaglutide and SNAC reach the bloodstream, the two components dissociate and enhance oral semaglutide bioavailability.6 The discovery of semaglutide led to the path-breaking innovation in bringing GLP-1RA in a pill.

PIONEER is the phase-III trial program designed to evaluate the myriad of potential benefits and risks, if any of oral semaglutide. There are a total of 10 pioneer trials (PIONEER 1–10). In these 10 phase-III trials, relevant contemporary T2DM therapeutic options both oral antidiabetic drugs and insulin were used as comparators. The program also included a long-term safety trial to study the use of semaglutide in individuals with diabetic kidney disease, as add-on to insulin as well as a cardiovascular outcome trial (CVOT) to evaluate the CV safety profile (PIONEER 6). Two other studies (PIONEER 11 and PIONEER 12) are ongoing trials in China, and their results are in the pipeline.

The most common adverse effect encountered in the landmark trials is predominantly gastrointestinal (GI) and was manifested as nausea, vomiting, diarrhea, and loss of appetite. It was dose-dependent, and discontinuation of the drug was uncommon and mostly occurred during initial dose escalation. If gastrointestinal adverse effects become intolerable, then the drug should be paused until these adverse effects are resolved. One should be encouraged to resume again with the lowest possible dose once the adverse effects have completely ceased. It was safe in subjects with varying degree of renal and hepatic impairment and does not require any dose modification. There is low risk of hypoglycemia across all the PIONEER trials and can be safely administered in geriatric population too.

Based on the landmark PIONNER program, semaglutide is available in three once-daily preparations to have optimal benefit-risk profiles—3, 7, and 14 mg formulations. It should ideally be initiated with the lowest possible dose with a 4 weekly escalation if situation demands to prevent or minimize the gastrointestinal adverse effects. It should be taken in empty stomach; it should be swallowed totally with a glass of water. One should wait for a minimum of half an hour before eating, drinking, or taking any other oral medication to promote maximum absorption of the drug. Patient counseling regarding proper administration of the drug and its possible GI effects and mitigating measures such as dietary modifications is extremely crucial for extreme effectiveness of oral semaglutide.

GLP-1RAs are an important group of glucose lowering therapy available for clinical practice. Though their administration is recommended by all the national and international guidelines of august professional bodies, yet they are hardly been preferred in practice by both physicians and patients due to its injectable route of administration. The innovative development of oral semaglutide is a major therapeutic advance and a game changer in the management of T2DM. The landmark PIONEER trials evaluated and demonstrated the bioavailability, efficacy, and safety of oral semaglutide. This oral formulation is a solution to the unmet need of a safe, noninvasive, and convenient mode of therapy; it will definitely increase patient adherence to treatment which is extremely essential for early and durable glycemic control, thus reducing the microvascular and macrovascular complications and comorbidities.